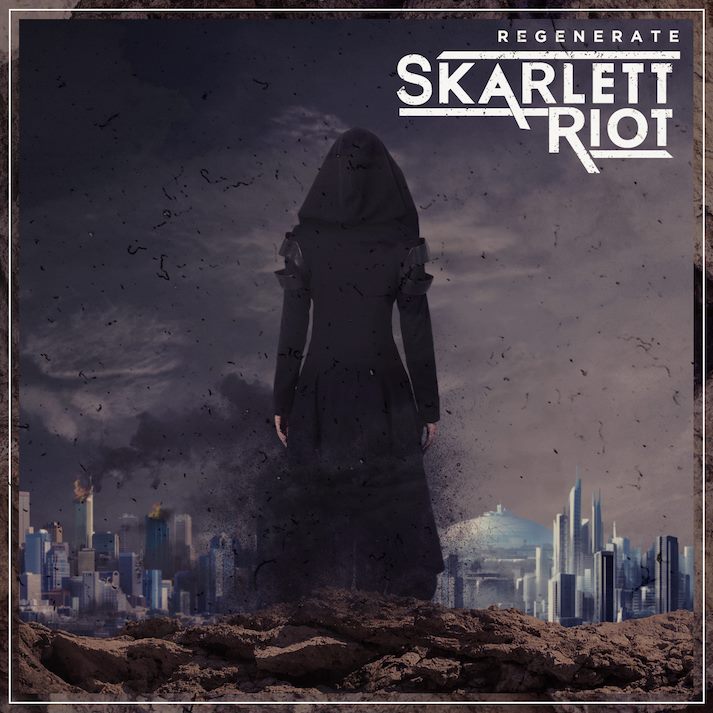 Interview with Skarlett Riot: presenting the new album and would love to tour with Halestorm!

Skarlett Riot is a young but very energetic and talented band from the UK. When I saw them on stage during Metal Female Voices Fest in Wieze I couldn’t believe my eyes and ears as it seemed as if a band with 30 years of experience and with the fire of youngsters was giving it all on stage. With the release of their new album Regenerate it was time to go for a skype interview with front lady Chloe Drinkwater:

Hello Chloe, how has it been since last time we met at Metal Female Voices Fest in Wieze?

It’s quite a while, well: we have been on tour with Devil Skin, touring around the UK. We have been working on the new album, signed a record deal with Despotz Records. Basically we have been working hard on getting all the material together since November/December and being stuck in the studio. We needed to get as many songs ready as possible.

How did you end up with Despotz Records (I know Beseech who teamed up with them and really love them)?

Alright! Well, basically our manager (Jeff Keller / The Artery Foundation) knows Despotz as one of his bands signed with them (Liv Sin). He send them some of our material and asked if they liked it and it happens they did. We heard they loved our music and absolutely wanted to work with us, help us with the promotion and touring. We took the opportunity. We got some other offers, but choose for this one. If we looked at the other offers: we wouldn’t gain anything from it and they wanted us to change the creative way of our music and style. A lot of labels wanted us to change things, whilst Despotz was happy with us being us and simply let us do what we wanted to do and that made the difference. We really enjoyed what we did. It’s rare these days that a label just gives you green light on everything and gives you the liberty you want and need.

Well, I recently read that even a big star like Ozzy Osbourne doesn’t want to release an album as it would cost him more then he can recuperate. I hear it’s really a financial struggle too. And that more and more people simply record in home studio’s. How do you feel it?

It is indeed getting harder and harder these days. We recorded in a studio who’s only an hour away from our home base, so it was pretty local (InnerSound Studio). It was the same studio that worked together with Asking Alexandria and Eyes Set to Kill. The people of the studio worked a while in The USA, but came back and we were very happy to work together with them. We wanted to record a similar kind of a sound. It was really fun and we were in their for like a month, in the beginning of May. It was really exciting as we didn’t knew how the songs would turn out, pretty much until the end of the month. You never visualize how your songs are going to be until the very end: until you have the CD.

What’s the story behind the title of the album Regenerate?

We wrote the album as like a fresh start, it was like a re-boot for us. About a year ago we had a few setbacks. We got a new management, a new agency, a label … It felt like a new start for us. I see it as a message for the fans: no matter what life throws at you can always change the direction, always learn from your failures and successes. We took a new path in life and it was time to change things and make things better. So no matter what kind of situation you are in, there is always a way to make it right.

Break has been released as first single, can I say that your sound is now a bit harder, faster and sharper?

Yeah, definitely. I think the new album somehow took a heavier turn actually. We seem to get heavier and heavier with each release without actually realizing it. I suppose it’s just what comes out. All the songs on the album are hard hitting, there are no ballads on it as it seems. It seems we wrote harder songs in a natural way.

Can I say you all bounded a bit more and know now better than ever how to collaborate together and get the best out of yourself? You sound like a family, like one piece.

Thank you for these kind words, we really hope we get back to Belgium soon as we really loved it.

That would be awesome! If fans know any festivals they would recommend to us, they can always help us out.

In order to sell yourself to these festivals: what is according to yourself your strongest point? What makes the difference with other bands?

That’s a difficult question, actually. I would say I definitely love performances. We like to bring the energy in the room, to involve all the crowd. We really appreciate our fans and I’m not saying other bands don’t. But I feel like on stage we connect with the crowd and we get them involved. We are always happy to meet the fans after the show, no matter how long it takes us to meet every single person that wants to meet us. For us it’s like sharing the warm energy that’s called life. I think seeing us on stage is definitely worth it.

Well, that’s exactly how I described the live show. I would add that you move like a panther, like a wild animal on stage.

I wear myself out, that is true.

It feels like your normal habitat: performing on stage.

For me that’s what is all about. We love the live feel and it’s the perfect way to share our music. We love it when we get the crowd singing and they really are a part of our live set. It’s just the best feeling ever. Especially when I forget my lyrics at least the fans know them.

The cool thing is: you are all very young, but you perform as if you have like 30 years of experience! At the end of my review I even put you on a scale between Amon Amarth and AC/DC.

It feels amazing, as these guys are really big and that is what we are aiming for. We love to aim high, so it’s such a great compliment. Especially as indeed we are quit young and we have years of experience to come, so we can only get better.

Who made the lovely Science-Fiction minded album sleeve?

It’s an American company called Zero Art. They also worked on the previous EP and we liked their work. So we carried on.

I love your new jacket, on the album sleeve, will you wear it on stage?

Well, it’s actually not m on the sleeve but a character. I kind of taken it as I love it for my own image as well as it really works well for the songs: Break and Warrior. I love it to have a hood on. I actually loved it so much that I bought a hooded jacket to wear on stage. I can’t wait to use it on stage and get into the zone with it.

Is Stand Alone a referral to Ghost in The Shell (I’m a big fan of it) or is a separate story?

Yeah, the first time I watched it: I loved the actress in the live action movie. I don’t know the animated version and still have to watch it. I actually wrote the song Outcast with the movie in my head as background.

Warrior is the perfect end song, how did it came up to work on a song like this?

It was one of the last songs we wrote. It fits well. It has a nice dramatic ending. I wrote it whilst thinking about people being bullied. I want people to come out as a stronger person. I wrote it with the idea that people who are in this situation will feel like uplifted and more positive. I wanted to help people who experience this to get out of it and get awareness of this situation. I want the listeners to get in sync. with the lyrics and get positive vibes from it.

This song might also be a nice way to help out people who have to endure sexual harassment, like what happened in the movie sector in the USA with that awe full guy (I’m not going drop his name)?

True and it’s nice to be able to write a song like that and sending out some good vibes with it. When I listen to music I want it to make me feel good or at least better when I feel bad. I want definitely our fans to get this feeling. I want them to stand up and feel more powerful after listening to our music.

Can you drop us some names of bands you love to listen too?

Right now it’s Bullet for My Valentine, Papa Roach, Skillet, Evanescene, Lacuna Coil, Halestorm … A lot of variation within it. It can go back to older bands and some more hard rock minded: Joan Jett and The Blackhearts, Def Leppard, Architects, Parkway Drive …

Are there other plans (next to play in Belgium) of performing outside the UK?

Yes, in December we will tour for the first time in Germany, next to a band called Santa Cruz. We will end it before X-mass, so we will be doing some X-mass shopping afterwards. We are all looking forward to play there. We hope to play in more countries, that’s one of our main goals for the next year. We would love to be a support band, rather than a headliner. So it’s all going to depend on who’s going to book us and who’s free. We really want to play our music more worldwide.

That would be amazing, like a wet dream! I have seen them a couple of times live and they have something really warm with their live shows. They manage to get everybody involved with them and it’s really lots of fun.

Well: our album is finally out and I can’t wait to perform it! Our new video for Warrior is also out, so please check it all out! The album was ready already a while ago and we have been really waiting for this time. We can’t wait to hear everybody’s opinion about the new album too. We love it and hope to see you on tour! I hope to come back to Belgium as I really loved it!