Bergtatt will bewitch you at the 2017 edition of Metal Female Voices Fest!

I prepared this interview before knowing the good news for you and the news about the postponed gig at MFVF. I decided to adapt my questions a bit, like this at least the fans know what’s coming and why you are not planned in for the 2016 edition.

I don’t speak any Scandinavian language, so what does Bergtatt mean?

Bergtatt has several meanings in the Norwegian language. It means something like bewitched, enchanted, captivated. But directly translated it means captured/taken by the mountains. ”Berg”- means mountain, and –”tatt” means taken.

What are the lyrics mostly about?

We write fairytales based on the creatures and anicent beliefs in the Norwegian folklore. We write about superstition connected to the woods, mountains and waters that was very real to our ancestors who lived more in pact with nature. 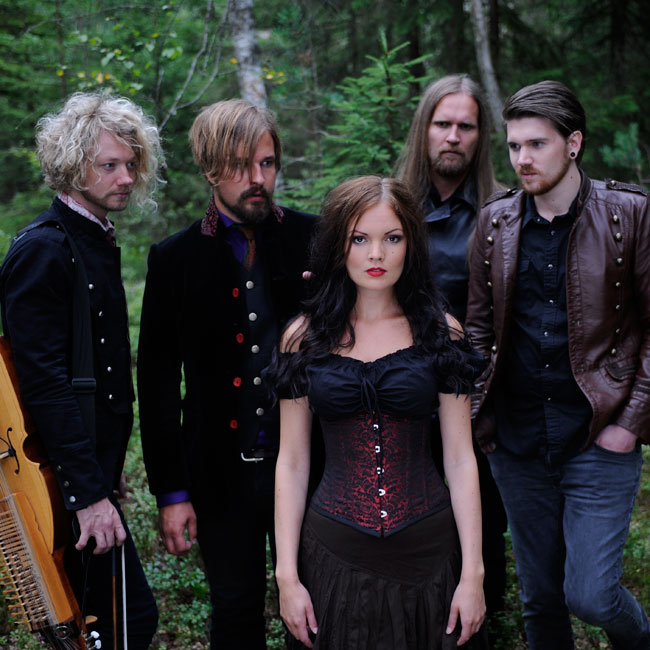 Who did the artwork and photoshoot?

The pictures were taken by Eva Rose and the artwork was done by Morten Skau Næss.

What is the beautiful ballad To Systre (sister?) about?

To Systre is an old story about a farmer and his two daughters. They are poor so he can only afford to marry one of his daughters. The youngest is to marry her boyfriend but the older sister is also in love with him so she tricks her sister down to the waterfall and pushes her into the river and kills her. Then she marries him instead.

Can I say that music wise you are a mix between L.E.A.F., Faun, Huldre and Eluveitie?

Yes that´s a good description of our music.

You recorded in the Crystal Canyon Studio, what’s so special about it?

It´s a legendary rock studio in Oslo. Many famous Norwegian rock bands has recorded their albums there.

How was it to work with Turid and Anne Marit from Katzenjammer and Norway’s most famous flute player, Steinar Ofsdal?

It was great, they are all amazing people. We know Turid and Anne Marit quite well as Turid is married to the bass player who played with us at that time. Steinar played with us on a TV performance in 2009 so we have known him since then.

So far you only have 2 albums out, is there a new one coming up soon?

Yes, we are now writing songs for our 3´rd album.

How was the tour in China?

China was amazing! We are planning a new tour in march/april 2017. Great food, polite people and the whole tour went as planned. We did 5 shows in 4 different cities in the south. We had an amazing tour manager who showed us local restaurants where we ate local food away from the tourist traps.

You’ll go back for a bigger tour! Are there other countries close by that you want to conquer?

Yes, next time we´ll  do a 2-3 weeks tour in the north. Yes, we would also like to do a tour in Italy, Greece and a longer tour in South-America. I know that other Norwegian bands have done quite well in these places.

You’ll play in 2017 at the Metal Female Voices Fest in Wieze (Belgium), how does it feel like to be selected (the choice was hard as hundreds of bands postulated)?

Second part of this question: originally you were supposed to play already in 2016 at the MFVF, but instead a new life has join your band and is due around the same time as the festival. Can you tell something about it, as it wasn’t planned in your schedule and how did the fans react to the news?

Yes, our singer and our guitar player are having a baby in September/October. So there will be a time now with few live gigs, but we are planning to do some festivals in Europe summer 2017. Our fans have been very understanding about this.

Will it be with the complete band in the acoustic set?

The festival is known for a lot of collaborations on stage, are there people you would love to invite on stage or simply jump on stage and perform with other artists?

Thats cool! We´d love to ask some vocalists to join us on To Systre, but we´ll have to see the lineup for 2017 first so we know who will be there. We are also open for joining other bands on stage if they want us to. So if anyone wants to use one of us on stage just send us an e-mail.

If you would have to pick out one more band to perform on stage at the festival, who would it be?

It would be cool to see The Sirens!

Did you already send in your demands for The Trolls et Légendes Festival 2017 in Mons (Eluveitie & Huldre played last year)?

I´ll tip our booking agent about that festival.

Thank you for your time and good luck with the little one coming!

Thank you! I´ll pass your regards on to the happy couple.

Discover the line-up of the 2016 edition of the Metal Female voices fest in Wieze: