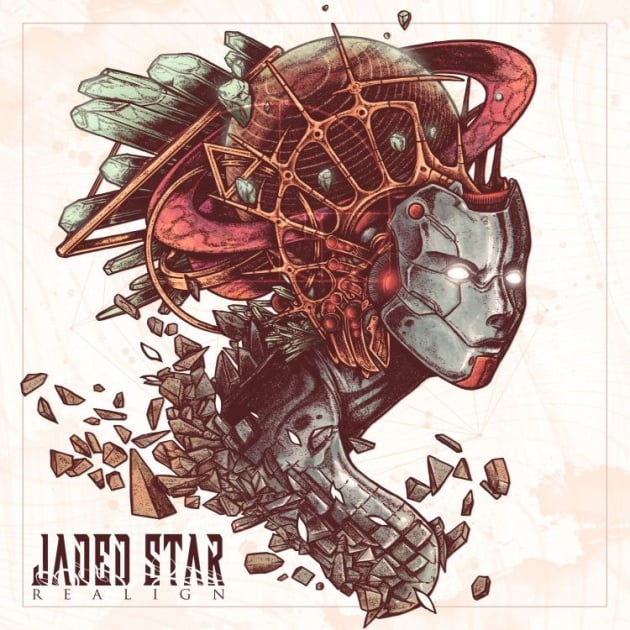 Interview With Jaded Star about the new album and Covid-19!

I saw Jaded Star on stage, loved them. They just launched a new album, I reviewed it and loved it too! So time for an interview and some extra exposure as I really want to help them out and get a wider fanbase as they totally deserve it!

Maxi, last time I saw you was also my first time: at the last edition of MFVF in Wieze. It was a magical weekend with acoustic sets, cool duets and most of all: artist that made you feel like being one big family. How do you look back at it?

MFVF has been one of the best festivals I've ever played and this because of the atmosphere! It felt like family from the first time I played there till the last and I hold all the memories and friends I made there so dear! I hope Val will make it happen again someday!

Around that period you also had a new album, how do you look back at it?

With Jaded Star we played our 2nd ever show at MFVF in 2014 without having released our first album yet. We received such great feedback and good vibes! All this love we got then kept us going!

Anno 2020 you release a new album: Realign. It’s a hard year for all of us. For most artists it means no more gigs, getting into a studio even forbidden as it’s a walled up area and could spread the disease. How did you record the album? Did you record it with a bit of fear of getting sick?

Our album was recorded in 2019 before all this Covid19 madness. It was released almost a year later since we had some new record deals on the table.

As performing on stage is getting (almost) impossible, how are you trying to promote the album (next to the clips)?

We're planning to shoot a live video playing through the new album and a few songs from Memories From The Future. Greece is under a 2nd lockdown right now so this is impossible. Once we get out of this it's the first thing we will do! In the meantime social media and connecting with our supporters is our main priority.

One of the few ways to promote a new album is to launch clips. How did you manage to get them done?

We think that this album should have as many video releases as possible. Female Fronted and A Pain all Mine were shoot this summer within 2 days of 36 shouting hours. It was hard, it was fun totally worth it and we would do it 1000 times over again!

Female Fronted was the first video and first single, it describes the band and how you feel about all the feelings around it in a perfect way. Can you elaborate it a bit more, please? Did you have some bad experiences from the past or is it just general?

Next video is Breathing Fire, I described is as “a fuelled track with lots of variation, cool electronics mixed with soft heavy metal touches, nice backings and a catchy chorus” .It sounds to me as a perfect single. How is the feedback so far?

Thank you, I'm glad you enjoy it as much as we do and people seem to love it so far!!I think we made the right choice, realising it as our 2nd single.

There is also a third (upcoming) video, can you tell something more about it?

Our 3rd single " A Pain All Mine" was released on November 6th and it's definitely one of the most powerful songs of the album and probably my personal favourite. I had seen this video on one of my daydreaming sessions haahahaha and when I talked with the director Angel Saft about it he said "I love it, we will go black and white" Mr John Katehis is responsible for the special FX and the result is what you see today. This is a very emotional song for me and I'm so grateful that all those emotions were put onto screen.
I already mentioned in the review that you are a vocal coach, how fun is it and do the neighbours complain from time to time? Do you do something else next to that to survive this financial drama that a lot of people have to undergo (next to health troubles)?

I'm a full time vocal coach for 7 years now and I LOVE IT! Helping people achieving their goals and dreams is one of the best things you can do in this life. I had some pain in the ass neighbours in the beginning hahaha but now I'm teaching in my studio, at 2 music schools and on 3 TV Shows. I can't complain, I have a lot of students and a small waiting list. I'm very, very, very grateful for that.

How did you end up signing with Noble Demon as record label?

Patrick Walch simply offered us the best deal we had received and he is also a great, great guy! What could go wrong? He is very supportive, always there for us and has a great sense of humour!

Rise Up somehow sounds perfect for Christmas, did I get the feeling wrong?

Why not? Rise up is a song motivating us to dare and jump in deeper waters, explore ourselves, break our limits and embrace life cause it's way to short. Don't back down, we gotta go up, we gotta evolve!

We're The Heroes ( A Song For Us ) could be used by all the nurses and people who keep on working in dangerous surroundings/area’s during this Covid-19 era. Am I wrong about this idea?

THANK YOU! This is a great idea indeed! Let's dedicate this song to them!

What is Vertigo about? My daughter loves the song (but I think it’s mainly because she hears you screaming Let it Go).

Many of the songs that I write including Vertigo talk about this inner burning and wanting/dreaming to evolve and be the best version of ourselves despite all difficulties. Vertigo is our chaos that we should use it on our advantage and regenerate through it.

You close the album with a great ballad that could fit a wedding as an opening dance Higher Than Love. Do I see it wrong and if you are/would marry what would be your opening song and why?

It would be a great wedding song indeed!! As for me...well if I ever get married "Let's go get stoned" by Ray Charles would be the perfect song ahahahahahahahaha

How do you see the future from here on? Working hard on promotion via the internet, doing interviews, Facebook live, home streamings, …

Yes, social media is for now the only way to connect with our people and we will do our best to keep the fire burning!

I hope you all stay safe and healthy and can’t wait to see you back on stage in Belgium!

You too Filip! Thank you! Hope to see you soon!