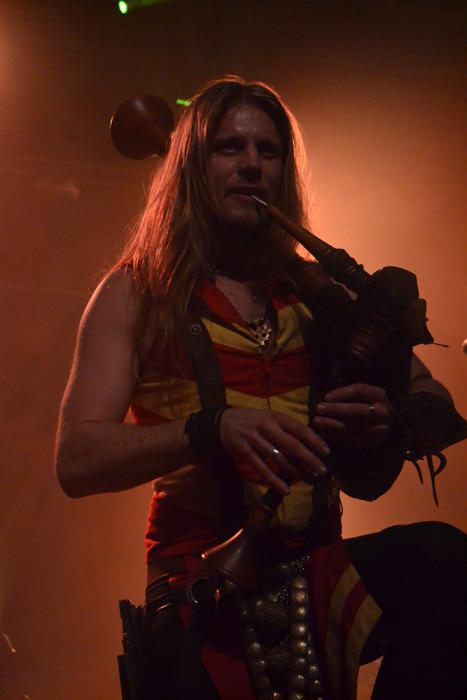 A Feuerschwanz interview is always funny! Enjoy it with us and get the image!

Feuerschwanz is one of those bands you have to see on stage as they are funny and have great tracks! The mix of fantasy, medieval stuff, a violin, a bagpipes and 2 singers who know how to enteratin makes it a must see! Their latest (double) album Das Elfde Gebot is a hit and thus having an interview with them (even joined by Melissa Bonny) was a must!

5 years ago we spoke each other during the Trolls et Légendes Fest where you played a sold out gig in Belgium. Do you remember any of it and how did it feel like?

Ben: I do remember the show - we had a lot of funny moments which even are running gags inside the band now! For example: Hauptmann's poor english - he said "Let's spring" during the show and he meant "let's jump" - "Springen" is the german word for "jumping"... I'm afraid i totally forgot the interview, could be because of the wild party we had afterwards in the hotel spa! I wanted to invite my bandmates into the whirlpool and stepped naked into the hotelroom i thought was their's - it was NOT!

5 years later there is corona and performing in certain countries (like Belgium and The Netherlands eg Castle Fest) is forbidden. It must be hard for a live band as yours not to be able to fully promote a new album and party on stage wherever you want? Yet you managed to perform in Germany, as for us very strange? And you excist now 15 years!

Ben: These times are terrible for a touring band. We played very few shows this year, all with different super-safety-hygiene concepts in front of smaller audiences with more space and stuff like that. We just hope this nightmare to end and make the best out of it, like writing new songs and stuff like that.

On the the new album I hear lesser bagpipes or is it me and what kind of bagpipes do you use (eg Irish or made in Germany)?

Ben: Yes, that's true - as one of the singers in the band i can't cut myself into two (or more) musicians. So in many songs we have to decide. Fortunately, this creates space for our violin player Johanna! My Bagpipes (even the Irish Uilleann Pipe) are all made in Germany by bagpipemaker Jens Güntzel. Right now, a good friend of mine who plays in the band Saltatio Mortis is crafting me another Medieval Pipe!

You created a lot of video's for this new (double album), it feels like you enjoy more and more playing your role in them, does that mean you feel like playing in series, videogames  or movies and maybe at same time get your music into it, like Wardruna (with Vikings and the more recent video game Assasin's Creed)? I also refered to it in my review.

Ben: We made all those videos to create some kind of our own fantasy universe - so it really kind of fells like being the character in a really weird computer game!

For this album you wanted harder stories a more fiercer dragon, ... where is it all going to? As in the end the biggest enemy of humanity is or a very tiny thing that is not visible with the naked eye (Covid-19) or humanity itself?

Ben: I dont know where it's all going to. Maybe due to all those real-world crisis, we all have even more needs of a fantasy world to dive into. With clear, visible enemies like dragons and the certanty that it will all somehow have a happy ending for the hero.

Das Elfde Gebot also implies something Christian, are you christians and not Pagans? Shouldn't you stop drinking and stop running behind women? I was BTW always told there where only 10 commandements.

Ben: I was educated catholic christian. My Mother was playing the organ at church in my home village and even conductor of her own church choir. I was also singing in that choir and enjoyed all this classical music a lot. Growing up, i discovered lots of philosophical problems with religion, especially catholic christianity and with the death of my mother i totally broke with it. So theres a lot of christian education left and even more anger about it. That's why i love singing about those things - it is and will always be an essential question of my life. I would say I'm an atheist, not a pagan - So i can drink and fuck as much as i want.

Next to the regular album there is also a cover album. I discovered you love hip-hop somehow or was it just to show off that you dan do more then just cover Powerwolf and Rammstein (and do it better than the original)?

Ben: We are all huge Deichkind fans, we even visited a show of them as a band-excursion to learn how to make a really good party live show! As a songwriter, i basically love and admire good and entertaining songs, no matter what genre they are from, if it is hiphop, metal or even the german "schlager".

You also managed to work together with Melissa Bonny, how was it to work with her and find a hole in her already busy schedule? Is she going to invite you in order to reverse the favor?

Ben: She was totally cool, not complicated, she immediately said "yes" and we planned a really big video shoot with her busy schedule, our busy schedule, the filmteam's busy schedule and even coronavirus kicking in and destroying all of our original plans! On the second attempt it all worked out and it was an amazing day with beatiful people and a super nice and professional Melissa! We loved it!

Melissa Bonny can you tell us your side of the story? How did you end up singing a song with FEUERSCHWANZ and on top getting picked out for a clip?

Last year, Feuerschwanz got in touch with me to ask me to sing on a song of their new record. The message came as a nice surprise as I was familiar with their music. Then, if I remember correctly, as we were discussing the release of their album, Hans told me that they were planning to shoot a video for this song. Shooting videos is something fun that I love doing and on top of this, it was the occasion to meet them in person. I like party music, I like the medieval touch that they have and I like nice people so it was a very cool collaboration!

How did you find the time to do it next to all the other things you did the past year?

So far, I've been lucky with timings and this collaboration came at the right time. I recorded for Feuerschwanz at the end of last year, a month before Christmas. I was preparing the songs of Rock Meets Classic 2020, Rage Of Light's schedule was pretty light (just a few shows here and there) and Ad Infinitum had just finished the recordings of "Chapter I: Monarchy", our debut album. Same luck for the video shoot. I am glad everything worked together so well!

Ben thanks a lot on behalf of my 11 year old son who was very much in love with your gig in Mons and who was so happy when he got the live DVD vom die Lange (aka you Ben), you are a giant with an even bigger heart!

Thank you so much, big sorry for the really long time you had to wait!! That's really not my style, I can't explain why. Totally forgot it! Kind regards