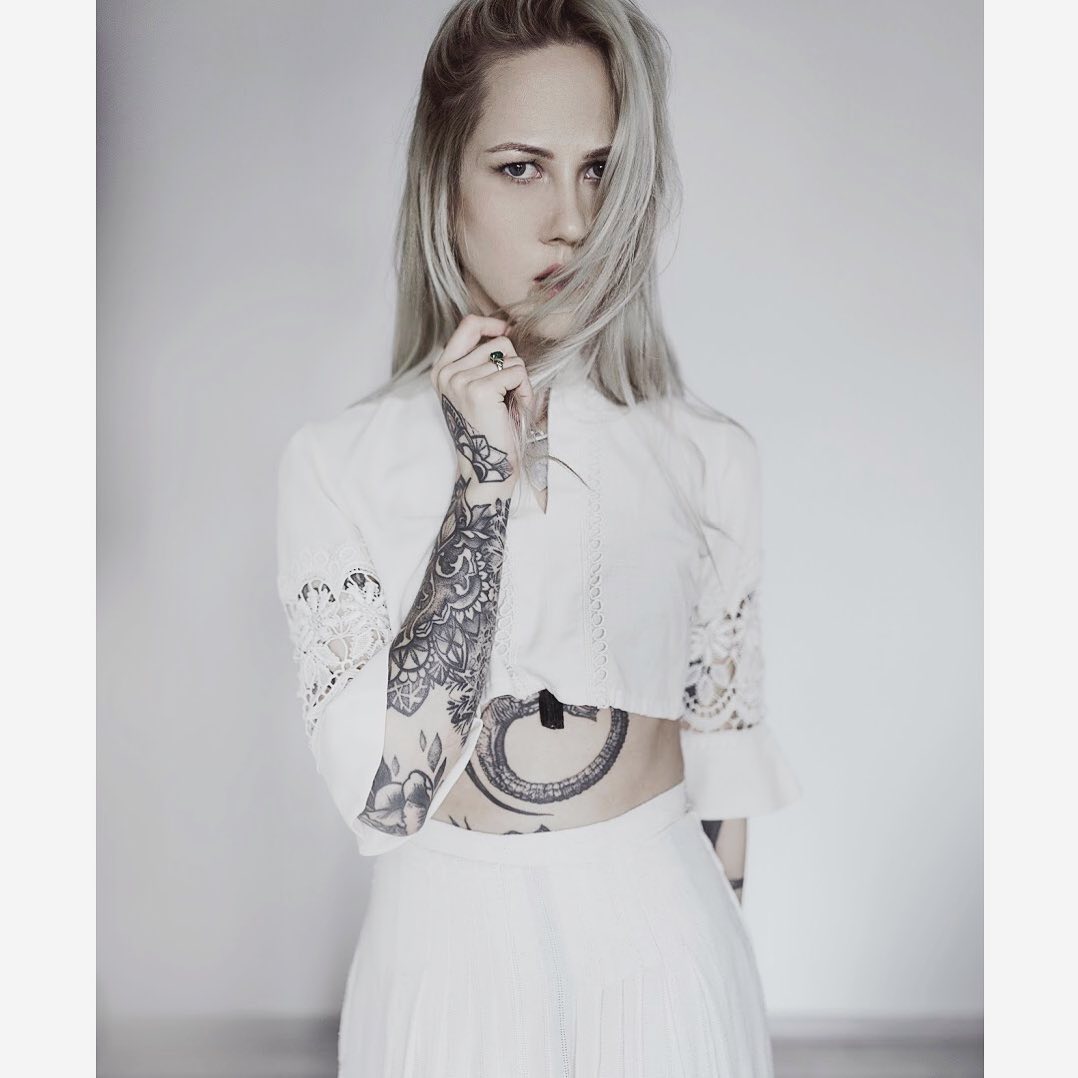 Having some mutual friends made me get in touch with Kadri Sammel, a multi-talented artist (Forgotten Sunrise, Bedless Bones, photography ...). Pretty fast after that I reviewed her first album and later on the remixed version. I got attracted by the music and almost like as in logic came the interview.

Kadri Sammel, you studied at the Estonian Academy of Arts. On what did you focus as art?
You only picked that one up I see - I actually only spent a semester there, studying photography. I have also studied in Tallinn University (cultural theory) and Baltic Film and Media School (audiovisual media), but never graduated; I guess I'm too much of a stray wanderer.

Did you start with a band / solo project really early or did it come after finishing your studies?
I started making music in 2014, and joined Forgotten Sunrise later that year. I guess the birth of Bedless Bones was right when I started making electronic music.

You are also a photographer, on what do you focus: landscapes, gigs, profile pictures of people, wild animal pictures?
I've always liked to stage photos, focusing on the aesthetic and the subliminal, the ethereal quality. Other than the occasionally captured nature and atmospheres, surroundings, I nowadays mostly take photos that are somehow connected with my music and in service of it, or collaborate with other artists.

You launched with Bedless Bones a first album last year, how did it feel like and how is the feedback so far?
The album just turned one year old and it feels super strange, I can barely remember myself back then, because I've been immersed in so much more music since then. I just really wanted to have the album out and was over the moon when it did and even more so when some people seemed to like it.

Bedless Bones has has been signed by Cold Transmission, but Forgotten Sunrise was signed by Out of Line, how did that happen?

Anders told me that they got the deal after they took part in Out of Line and Sonic Seducer magazine's Battle of the Bands competition, where the winner got a record deal. BUT they did not win, but came second. However, one representative from Out of Line liked their music for a long time, so they also got the deal.

You called the first album of Bedless Bones "Sublime Malaise", how do we have to see it?
You can see it however you like it. You can interpret the title how you want or if you just want to listen to the songs and not think about that, that's fine too.

I dropped some names whilst reviewing the album: Wardruna, Depeche Mode, Silke Bisschof, Insekt and on the remix album: Suicide Commando. Any comment?
Interesting. Some of these artists I have never been compared to before. I must say, none of them were an influence for the album. At least not consciously.

How do you choose your title’s? Like for example Niobe?
Niobe is a rendering of the myth, an imaginative exploration to an untold side of it. But in general I'm not very good at coming up with titles. I try to capture the essence of the song and then not say it. As with all the textual parts of my art, I am very interested in leaving some things out and letting the listener have their own ideas. But sometimes I will say it directly. Or create obvious contradictions to confuse - like with my song Losing Control.

You use a very wide range of genre’s: techno, tribal, electro, EBM, Industrial … and yet you make it so that they all match with your unique voice (and also play with effects on your voice), how do you get it done?
I'm absolutely not interested in following one genre or not even creating my own 'sound' or whatever, I just started experimenting and somehow this world of sounds unfolded before me and took all these shapes and forms. I think I like harsher sounds and beats because it's like a refuge, a fortress for me and my voice and I feel secure and empowered in this dominion. But when high levels of energy become exhausting, I will play with something different.

I saw you launched some quarantine video’s, how did it feel like to record them with no real life audience?
I've managed to record some clips with the help of friends. But I've also played live a few times recently as well, when the regulations allowed.

I heard the situation towards Covid-19 (except for one idiot who kept going out after he was told to get himself tested and waited too long and didn’t isolate) is much better than in Belgium. How do you live with it? If you still live in Tallinn (the biggest city in Estonia), it must be hard to avoid people, wear a mask, not to have gigs with an audience …
Like I said, I am one of the lucky ones, as I recently had two live shows. But in general, it sucks of course, it sucks for the whole cultural sector, for entertainers, club owners, promoters etc etc. Me not being able to crawl on the stage that much right now is nothing. I'm a grain in the sand. And in my daily life avoiding people is not very difficult for me, I also moved away from Tallinn just recently. But this situation can't go on like this forever, we have to learn to live with it and adapt.

I also noticed you are like almost dressed-up in tattoo’s, for what do they all stand for?
They have different references and meanings, obviously. I have an H.R. Giger Alien tattoo, The Wicker Man tattoo, Ronja rövardotter themed tattoo... I share a tattoo dedicated to The Cramps with my boyfriend Anders and also a tattoo for Forgotten Sunrise etc

The last album I reviewed from you was After Malaise: an album filled with remixes. I usually don’t like remixes, but here it was a shot in the rose. How did you choose the people who did the job and can you tell us a bit more of them? Artur Lääts for example?

I chose artists I wanted to see re-envisioning my work. Some of them are very good friends, for example Cly/Suva, who is a great producer, also a member of Forgotten Sunrise and has been the sound tech for Bedless Bones live shows as well. Oudeis is another very talented and productive Estonian artist, who focuses more on noisy soundscapes. Artur Lääts is a well-known techno DJ and producer, and booker for the Estonian underground techno mecca Hall, which is like a second home to me and where I've also played many times. His meticulous taste and driving beats really shine through the remix as well. Then there's Wychdoktor, whose work I've followed for a while because of the genius way he mixes elements of rhythmic noise and primal, tribal ideas and patterns together in wonderful, touching tracks. And Nuclear Sludge, who is Jimmy Svensson from Sweden, also a member of Alvar and Æmit. His approach brings in the much needed brutal EBM/industrial slap that the release was missing.

Another thing I noticed is that all the cover albums are blurry, is there a specific reason for it?
The album covers are paintings by Latvian painter Alvīne Bautra, flowing multiexposure-like atmospheres are her signature style. We have a great connection with Alvīne, through music and art and we share a respect and admiration towards each other's work.

Talking about covers, you recorded Jack The Ripper from Nick Cave?

Nick Cave is my favorite artist, I grew up with his music.. I don't really remember why I decided to cover this song, I guess I was humming it and twisting the lyrics around and then decided to record it.

You told me in a chat that you are the third niece of Ewert Sundja, never thought about working with him or with some other of our mutual friends like mister Atso, Mauno Meesit, Dmitry (Freakangel)?
Yeah, mine and Ewert Sundja's great grandmothers were sisters, but we've not met in person, although he's a great musician and his band's Good Man Down album is a masterpiece. As to working with any of the artists you mention - they all have their own thing going on and so do I.

Are you working on a new album? Any idea’s/ plans for the future?
I'm working on a new release indeed. Also other interesting things in the making, that are too early to talk about. Nothing stops. Keep pushing.