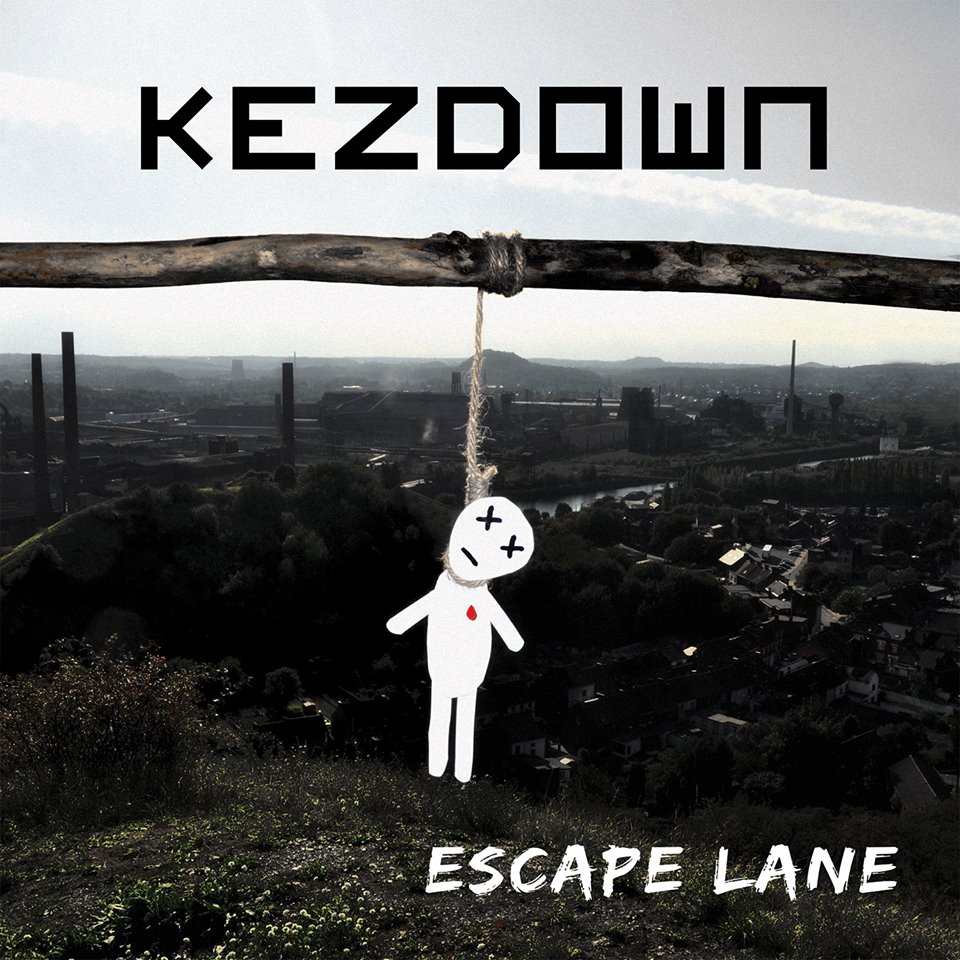 Kezdown: the dark stories behind the scene and some funny stories!

Last weekend I reviewed Kezdwon's album, loved it and decided to send out an interviewrequest as I was really touched and intrigued by their music! So here we go:

Kezdown, what’s the meaning of this name?

In fact, it doesn’t mean anything. This name is Math’s idea. And according to him, there is no real meaning … This guy is quite mysterious.

Didier, knowing you have a busy life, why did you start a new project next to The Breath of Life?

About 3 years ago, Math made me listen to some instrumentals demos.  I found it nice. And, just in order to pull his leg, I said that I should sing on it ... And finally the joke became real.

How did you decide on how the music would sound like and with whom to work?

Most of the time, we proceed this way: Math brings us some ideas with no singing and just a metronome beat. I have to feel which one could become a real song. That makes him frustrated when I don’t choose the music themes he likes the most. Then, I work on the lyrics, the way of singing, and some eventual guitars. Gaston is in charge to make a real drum beat to stick everything together.

I didn’t knew you also sang, what did I miss?

Because you didn’t know about me in 1992.  At this time, I made a band called “Bloody Minded”. A kind of power pop trio. I sang and played the guitars. I still have a tape if you want?

To be honest, the album is lyrically one of the darkest ones I heard the past year, how come?

I would say that the mood of the album is more like dark humor than dark or sad poetry. I really love dark humor and especially english absurd humor. Like, for examples, the great “Monty Python” or the cult serie : “Little Britain”. As Terry Jones said during an interview (in 1983, in Cannes, when the “Python” won the grand jury prize with “The Meaning Of Life”): life is absurd … So there is no reason to fear about it.

Is it also a tribute to Frank Tovey? The way he died (he hang himself)?

That’s funny because, despite the fact that I’m a total Fad Gadget lover, I did not think about him when I wrote the album.

Frankly Frankie is that a tribute to the other great Frankie in EBM land?

Not at all, in fact, when I speak about Frankie, it’s about Frank Sinatra … Not really an EBM figure. You should know that one of my brain hobby is the assassination of JF Kennedy in 1963. Who really did it ? Why ? … I like all the plot theories about the JFK death. And well, I think that his great friend “Frankie” Sinatra played a role in it.

My dear Filip, let me congratulate you ! You have found the answer in your review: EVDB is Erwin Vandenbergh ! Notice that in this case, we are very far from dark lyrics. This song is a real tribute to him. When I was a teenager in the 80’s, I was a big football fan. To me, Erwin Vandenbergh was the best striker of all time. Elegant, powerful and clever… I’m not joking at all. I plan to send him our album. I will let you know about his eventual feedback.

I noticed in the video of “According To” that you use the same standard as with The Breath of Life (the plant on it), was it on purpose?

Hey! You’ve seen it! Well done! I stole the micro stand of Isabelle. It’s just a nod to my partners in The Breath Of Life.

How was it to shoot this video and where was it done?

It has been shot in a big audience room of a city office near La Louvière in Belgium. At night, the office was deserted. We made it simply, no special effects, just like in ancient times.

You signed a deal with Wool-E Discs (same as with The Breath of Life), what is Wool-E doing for you? I ask this as I know more on more is done by the basis of digital campaigns and I missed the launching (but I’m also a very busy person).

Dimitri from Wool-E Discs is the right person at the right place. A man of passion and a music lover, always present with his shop at every darky event. His customers look the same as him: enthusiasts and passionates. I like that. About digital campaigns,well, we are a little bit lazy with our computers. That’s maybe why you missed it. But, we gonna make our best in the future to be more web-friendly.

You also managed the musical part in 2017 edition of the sold out festival Trolls et Légèndes (with Wardruna as headliner), how was that experience? Would you consider doing it again? Did you learn some things for yourself?

Great experience. But it’s gonna be a one shot. I left it exhausted. I’ve seen, from the inside, how a great festival with an audience of more than 10.000 visitors in 3 days works. I’m also proud to have been the first promoter ever to invite Wardruna in Belgium.

In the past you were a member of the Fantastisque.Nights and Club New Wave team and thus worked with Fred Cotton. Are you still doing it? How do you look back at it, knowing that Fred is like a real master and perfectionist in what he is doing?

Yes, I’m still involved in it. If you want a drink ticket at a Fantastic Night or a Club New Wave Party, well, you will be forced to come to my cash register ! Master and perfectionist … Yes , these two words suit him very well. More than a tie.

In August you will play with The Breath of Life at W-Fest, any thoughts about that?

I‘m sure that I will a have a real good time. That’s a very well organised festival. And you know, I’m a very nostalgic person. And of some of the headliners of the W festival I have good memories… Also bad ones, but when you get older, everything sounds nice to you.

I noticed you will play with Kezdown in October, can you warm us up for it? More upcoming gigs?

What will the future bring for you and Kezdown?

It’s too early for my last words.