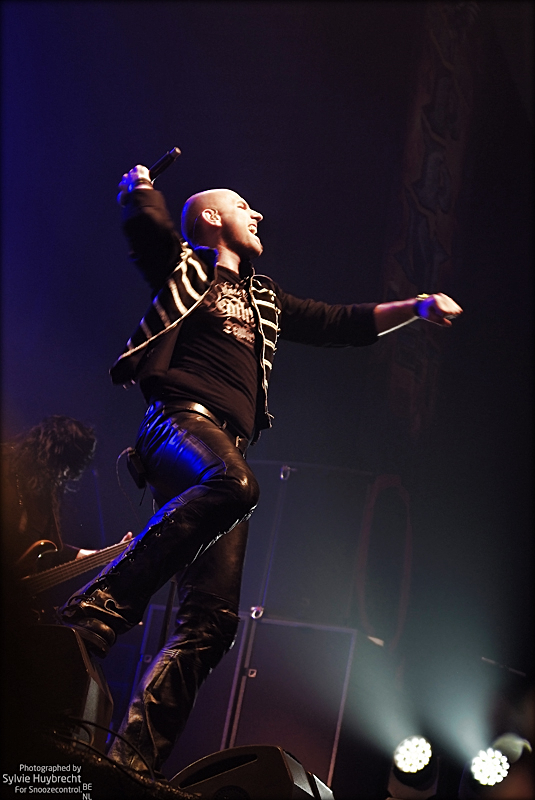 This is part II of your tour. I guess that means two things: part 1 was succesful enough to plan a part 2, and second, there is no new CD coming up in the next few months.

All: True, you're completely right on both aspects.

You did some shows with Within Temptation during part one of the tour. How was that?

George: It was really really cool. First of all, we always dreamt of playing in front of a really big audience. Normally we only get the chance to play for -let's say- 5000 people, when we play on a festival. But this time we played in front of 5000 people in a hall, in a huge venue.

The first part of our tour was really a huge succes. You don't know what to expect when you first head on tour, you have no clue at all. It can happen that there are only ten people every night. We hear about other bands, really big names, that sometimes have only 30 people standing there, so for us things went surprisingly well. And that motivated us to do a new tour, the one we are doing now, and which is also succesfull. For sure, there are a bit less people, but that is normal. We expected that.

The Tour ends somewhere in May I believe?

Clemetine: The tour is until 23th April but we have a couple of gigs with Xandria in May.

Summer Festivals on the agenda?

All: Masters of Rock, Out and Loud, Rocknacht Tennwil ...THIS one! (laughing)

Are you already thinking about a new album?

Fabio: We haven't started working on one. This 'War of Ages Era' as we call it, will end with the last shows in October/November. After that we will concentrate on new material. First we have to finish this promotion of the actual album, and then we wil move on.

The band consists of bandmembers from 3 different countries: Austria, Italy and France. How does a band like that get formed.

Fabio: It wasn't formed that way. The band is originally from Austria. For some years the band consisted of Austrian members only. But then the bassplayer left, in 2010 I think. That's where I was contacted to join the band.

Because there was no bassplayer left in Austria? ^^

George: That is the truth. If there had been a real good bass player able to sing in the neigbourhood, for sure we would have taken him. Buy I knew Fabio from a session we did together for a French band called Fairyland. I did some guest vocals there and that's how we met.

Fabio: so when the previous bassplayer Simon left, George asked me, and I said Yes! That was the first step toward a band with 'foreigners'.

Clementine: I was a guest-singer at first, until the tour with Delain in 2011. I was supporting Serenity because they always needed a female singer since they have at least two songs that they really need to play live, with female vocals. After that the idea came from their side to make me a permanent member. I'm sure that if there had been a suitable singer living more in their area, they would have picked her, instead of someone who lives miles away.

But how do you rehearse, living so far apart?

Fabio: with the modern technical means you are able to record chords at home, and send them over to the other bandmembers. Most of the work is done over the internet, even with the producer.

Clementine: when we decide to go on tour, we meet up a couple of days before, and we work hard then. We have the chance to do most of the work at our own places. When we finally gather, it's about getting the feeling of working together and adjusting some parts, but we manage without rehearsing to much, although it would be better to do it more often.

Who writes the lyrics in the band?

No that's more him (points at George). Almost all songs on War of Ages are little pieces of history.

(to Clementine): During today's show there was a problem with your microphone when you were singing the first song. We didn't hear you in the hall. (PPM)

Clementine: On stage there wasn't! I could hear myself through the monitors. But I saw people in the audience telling me that the microphone wasn't working. And I heard that Epysode yesterday (at PPM) had the same issues.

True. And those problems lasted longer than just one song.

George: These things happen on festivals when you can't work with your own sound engineer. You have to rely on the festival crew and there is no time for a prolonged setup. But even when you have your own sound guy, things like that -and worse- happen. I saw a band headlining Wacken once, and the microphone of the lead singer didn't work for as long as three songs although everything was working on stage! And they were headlining and they had there own crew and everything. Technical matters are often a source of problems. But you know ... for the fans it doesn't work ...

You didn't play your most famous ballad, Fairytales!

George: I think it's the first time in history that we didn't play that song!

Clementine: the problem is, on festivals, you only have 30 minutes, and if you bring a ballad you immedeately break the energy. That's why we dediced to leave it out this time.

This ballad seems to make the band really popular though, it's the one song that most people know. Why don't you make more ballads? ^^

George: We have more! But for some reason it's that particular ballad that everybody wants. On War of Ages we also have 'For Freedom's Sake', which is a ballad. But fans keep asking for Fairytales. I don't know why ...

The Video of 'Wings of Madness': what is the story?

Clementine: It's a story inspired by the legend of Elizabeth Bathory. It features George and I as a couple -we don't see it happen (laughs), but in the video we are. I get in trouble in my mind, and I try to reach my husband with a cry for help, but he is too far from home fighting a battle. By the time my message reaches him, I have lost my sanity, and I have done horrible things to young women. George finds me bathing in their blood, like Bathory did.

George: it's what the song is about. But for those who buy the album: there is a short text included with every song, explaining what the lyrics are about. Can't miss!

If you could take just any band on a tour to -say Asia- ... who would you take?

You are a huge Queen fan, aren't you?

George: I am! I grew up with that band. And we did a cover of 'Love of my Life' on the last album, as a bonus track.

Ah, that explains why your English is so good! You've been singing Queen lyrics since you were able to talk! (laughing).

Thank you very much, George, Fabio and Clementine.