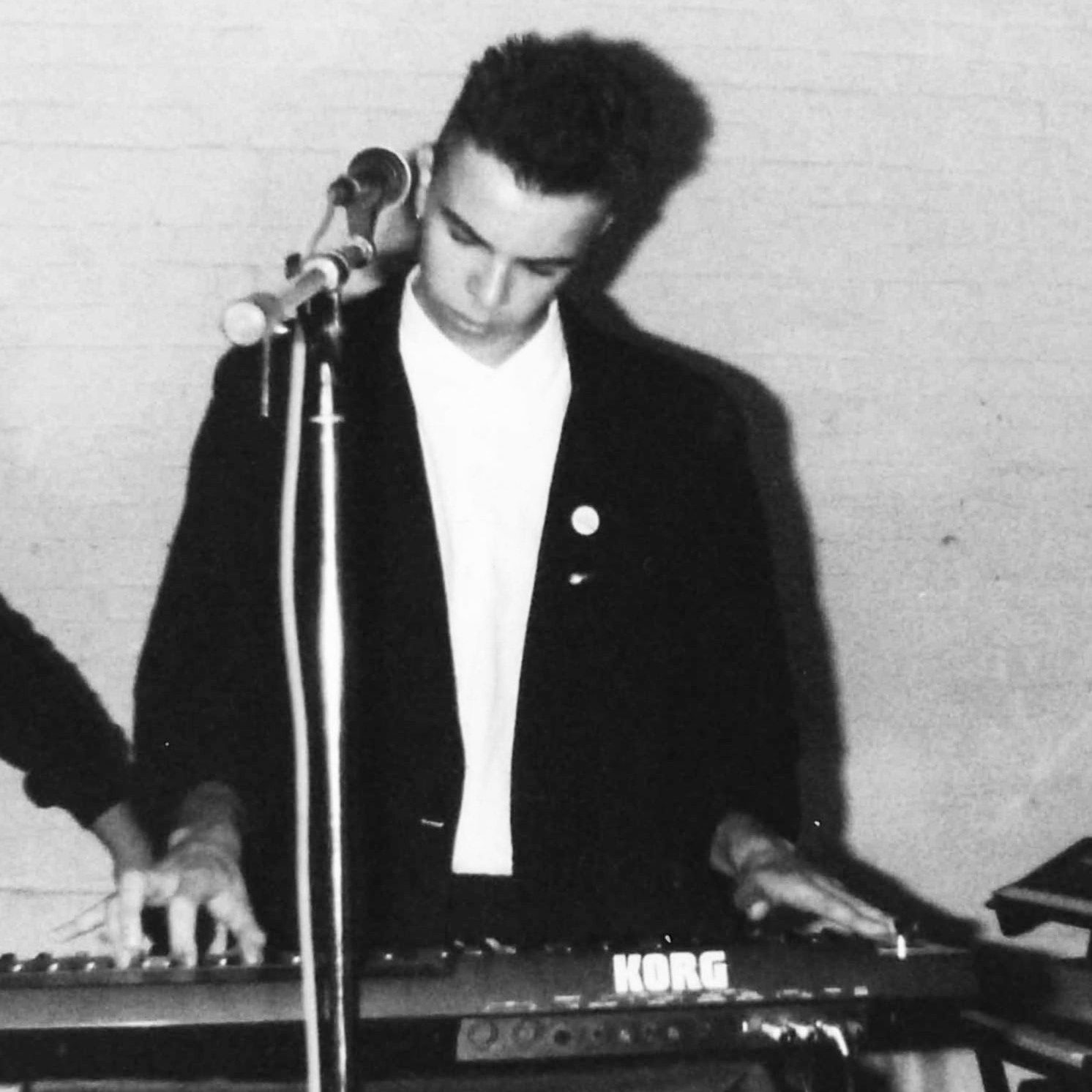 Interview: discover the story of The Ultimate Dreamers!

The Ultimate Dreamers are a post-punk / cold wave band from Brussels who worked on some demo’s between 1986 and 1990. They got revamped and remastered. On the 01/10/2021 you will be able to buy a physical copy via Wool-E Discs / Dans les Profondeurs as a vinyl, CD. You will also be able to buy it digital. Frédéric Cotton was so nice to answer my questions (vocals/synth). Enjoy!

My classic starter: why did you choose to go under the flag of The Ultimate Dreamers? What’s the idea behind the name?

When we started the band, we felt a bit lonely in a musical desert, there in Lessines. The three of us wanted something deeper both in the music and the themes developed. We were some kind of dreamers. At that time, I was also very interested in the interpretation of dreams. This name came naturally to me. I presented the proposal to my friends who instantly adopted it.

The band was active between 1986 and 1990. Can you tell us: in what kind of places did you perform live and where did you record the demo’s?

We mainly performed in our region. Firstly in Lessines where we created a yearly underground festival, then elsewhere in Hainaut for different kind of events. We only gave about 15 concerts. The demos aren’t real ones. The idea was to keep a trace of the songs but we never aimed to publish these recordings. We recorded most them in Joël’s bedroom and in mine and the last ones in our rehearsal room.

Any funny stories from back then? Or misadventures?

We had a song we made for fun that was called “Fucking the Funk”. It was some kind of synth punk song including a Deep Purple riff! That song was working well live and people loved it. Once, at a festival, an aggressive guy came to me and said: “I love funk music, I already saw you and I don’t like you. If you play “Fucking The Funk”, you’ll have problems with me! When we came on stage, I wasn’t sure we would play the song but some people asked for it so much that we finally did it. After the show, the guy catched me on the parking lot and threatened me with a knife! Fortunately, I was rescued by my girlfriend 😊

You gave the demo recordings a name: Live Happily While Waiting For Death. From where this name? Will people also get the lyrics? Who wrote the lyrics? How is the feedback so far?

This title comes from a book. Try and find it! It perfectly reflects our mood of that time: a mix of discomfort, sadness and humor.

I wrote all lyrics but some ideas came from friends. I had different sources of inspiration. As explained before, I was fascinated by dreams and initially, my lyrics were frequently based on them. I also used surrealist techniques such as automatic writing which is quite interesting.

The general feedback is quite good so far but it’s a bit early to take conclusions. We have many preorders from foreign countries like Russia or USA. We just sent the promo to the press a few days ago. The first reviews are arriving and are rather good. The important point to remind is that these recordings reflect the band we were 3 decades ago.

Now 30 years later the band has been resurrected, but not everybody from the original formation is on board, what happened? Why this break of 30 years?

Laurent, Joël and myself were friends at the secondary school in Lessines. We had some common musical tastes and we started a band called No Position with 2 other musicians. At that time, Joël played drums, Laurent bass and I already was the (very shy) singer. We gave 2 concerts but after a few months, we soon realized that the other 2 guys had different views and we left No Position to form The Ultimate Dreamers with a drumbox, Joël moving to synths. During 2 years, we were very active, writing lots of songs and playing concerts. Most tracks on the album come from this period. Then, Bertrand joined us on bass, Laurent took the drums and I started playing guitar. Our sound then became rougher.

In 1989, Laurent left the band because he had not enough time to manage all his numerous projects and Bertrand had to stop for familial reasons. I went on with Joël for a while and tried a few new musicians but it didn’t work. I was focusing on my studies and it was time for a (very long) pause. Joël then took part to many different projects: he had a label, played bass in different bands and even was a wrestler! Bertrand kept on playing guitar for himself. I remained active in music as a concert and parties promoter.

Can you present us a short bio of who is who and does what in the band?

First of all, we have a new member on keys. Sarah wasn’t born when we recorded the song in the 80’s but she’s very into this music. She played keyboards in Les Panties (one of the finest Belgian post-punk bands of the 2000’s to my opinion) and Empereur and she’s also the singer in Turquoise, a nice shoegaze band.

As explained before, Bertrand and Joël spent the last 30 years playing guitar and bass, respectively. Logically, they kept their instrument in the new version of the band.

Personally, I take care of the mike as in the past, and also of programming.

How did you end up writing a song like Japanese Death (Arakiri)? What influenced you?

Actually, the song is about the disaster of the Hiroshima and Nagasaki bombs. By extent, it is an advocacy against nuclear weapons. You have to remember that many countries including France were doing regular nuclear tests in oceans, for example.

What influenced you all to start a band and pick out this genre (drop some names)? I dropped The Cure and Siglo XX as possible influences.

Our influences were quite numerous. Firstly, the Belgian underground scene: The Neon Judgement, Minimal Compact, Siglo XX indeed, Polyphonic Size and other less famous projects. We also loved most 4AD artists, namely Dead Can Dance and Cocteau Twins. Bertrand was the only one who loved The Cure. I was (and still am) a huge fan of Joy Division and New Order. I also listened a lot to And Also The Trees, Clan of Xymox and Trisomie 21. The latter was a major influence to me.

Who does the second voice of Never Die? What is this song really about?

The second voice is mine, recorded. Initially, the short lyrics were about the loneliness of death. With the release, we turned them into a more humoristic interpretation around the theme of vampirism.

Are you nervous about the upcoming gigs (covid-19 and restarting on stage)?

Stage fright is a reality for everyone and we make no exception. I was very shy when we started the band and climbing on stage was very hard at the beginning. I think we will manage it more easily now. From the pandemic point of view, the risk of a 4th wave is real but I think that the COVID safe ticket is the solution. Let’s live the day (before death takes us).

Can you make some promo for the upcoming gigs and release party? What to expect?

We have a few concerts already confirmed in Belgium and we are working on more dates, including in foreign countries. We have a set of 15 songs including 2 covers. We had many rehearsals and made a few tests: it works well. The sound has evolved a bit and is modern. People loving post-punk and new wave should enjoy it. The release show will take place in the nice CaliClub (Drogenbos) on the 2nd of October, together with Partikul who will also present their new album. Then we’ll play the De Verlichte Geest (Roeselaere – 9 Oktober) with The Mars Model, the Wool-E Fest in Magasin 4 (Brussels, 27 November), the Rock Classic (Brussels, 11 December), the B52 (Eernegem, 15 January) and more.

Who decided on the clips and was it easy to work out? What is your favorite clip so far? Will there be more clips coming?

The clips were made by Valentine Blanco after exchange of ideas with me. She prepared 8 clips using different royalty-free images, mainly old films. I like them all but my favorite is the one she made for “Female Zone”, the closest to the theme of dream. The next clips will come with new songs.

What’s next? Anything to close this short introduction interview?

We have planned a photo shooting with the very talented Xavier Marquis. Then live shows, we are very looking forward to playing live. Then making new recordings and writing new songs.

Thank you very much for the interview, Filip.