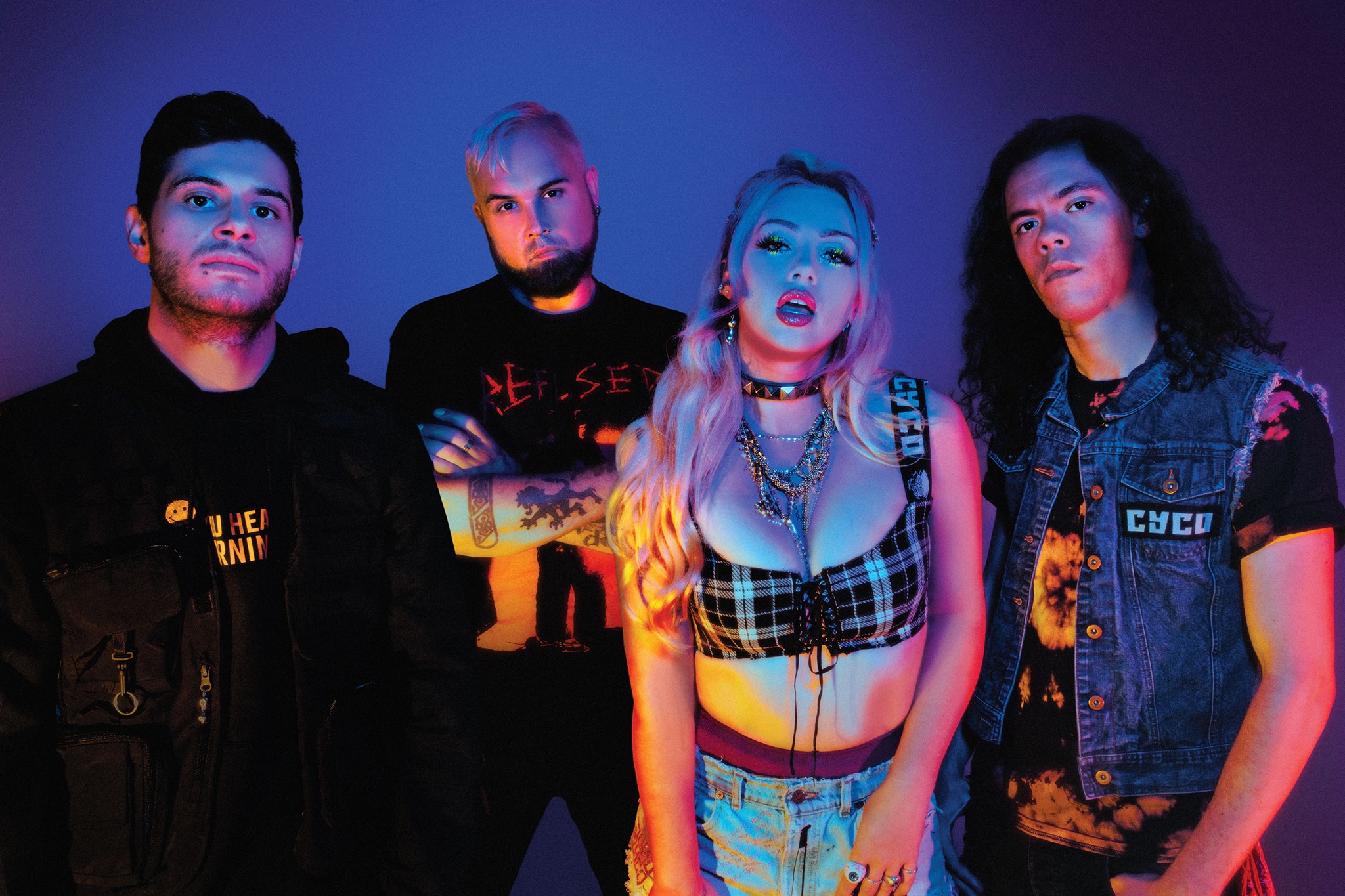 Canadian female fronted rock/metal act Sumo Cyco: stripped in an interview for you!

Sumo Cyco is one of the bands of the moment for me! Discovered them whilst watching clips and love their sound that mixes a lot of different genre's with great vocals and I have a feeling this band would also burn down the roof once back on stage! I tried to strip the band for you with the questions I had and even had some help from my family with that! Thank you Skye for taking time to answer our questions! Enjoy!

My classic starter when I interview a band for the first time: from where did your band name come from? How did you decide on it?

Before our first show, I made a list of words I thought would work for our band name. I stuck SUMO and CYCO together and liked how it sounded phonetically. SUMO brings images of strength, power and CYCO (or Psycho) being unpredictable and wild. We felt that described our sound pretty well.

When I checked your latest video’s my daughter (who’s 6) told me she loves your Harley Quinn look and dislikes the blue coloured hair. So Skye, what do you prefer?

For me it’s all about changing my look and creating different characters. My hair has been every colour under the rainbow, and I find it a fun way to take on different personalities. Say hi to your daughter for me!

My daughter has become a huge fan of The Bangles (because it’s an all female band), but she also like’s what you do and find some things even a bit funny. She also like strong women who conduct their life and music the way they want. Have you had more reactions like this (kids loving you and telling it’s kinda funny)?

I love The Bangles too. Yes, recently our friend showed his kids the music video for BAD NEWS with a 3D Oculus Viewer. In the scene where the giant spiders are on the front lawn, Colton said, “The Giant Spider stole the newspaper” and I realized I made a mistake with the graphics in the video. The newspaper on the front step suddenly disappeared with the Spider nearby. But it made me laugh that in a child’s imagination a Spider would want a newspaper.

My daughter also asks if you have kids? And if yes how do they react to your music and act?

No I don’t have kids. But it’s sweet when fans or friends send videos of their kids loving the music, dancing or singing along.

Last summer our family was supposed to go Canada and finally meet our relatives, but COVID-19 screwed it all up for us. Since then I discovered 2 great Canadian artists: Daemon Grey (who’s also a male stripper) and you. Are their things not a lot of people know about you either (like this stripper story)? Or what would you love to do that is a bit out of the regular path?

Well I have no history of being a stripper if that’s what you’re asking.  I have been in the music industry since I was 12 years old, and my whole life is documented. Some people don’t know about the ceiling fan incident when I was hit in the face with a ceiling fan: https://www.youtube.com/watch?v=1_wx-snzMCU

On your last album you created your own world, but it’s not the most happiest one? What inspired you to create it this way?

The world makes me happy, even if it has problems. And I think it’s full of turmoil, like any good story, ripe for overcoming.

Everything in Cyco City is like a warped reflection of reality. Many of the stories are metaphors for the way I see the world. You can enjoy the visuals on the surface but also dive deeper into the storylines and easter egg mysteries.

A thing I noticed about your music is that you mix a lot of genre’s (and it works great). It’s cool, but I suppose it’s hard to make it work. How do you decide about it and do you test it out on others before releasing it?

Yes we love mixing all sorts of genres. We are pretty confident about how we make our music. When Matt (guitarist/producer) and I write and record we have different tastes and when we find something, we both agree on it’s like a bad ass explosion of colour and flavours. I have to hand it to Matt, because he kills it on the music side of things. He’s a great composer and knows how to use rhythm and dynamics in very effective yet interesting ways.

I mentioned No Doubt and Skarlett Riot and coming the closest to your sound (and once even Guano Apes). Are you familiar with them? Are you happy with it or does it make you angry?

No Doubt is a huge influence on me and Gwen singing “Just a Girl” was a huge moment for me. I was introduced to Skarlett Riot when we played shows together in UK. They opened for us on tour and I have to say they are amazing at tour pranks!  Guano Apes I’m familiar with as well but the first time I heard of them it was because some fans said we had similarities. It doesn’t make me angry to be compared to other artists. I expect it. It’s always a motivation in me to be known as an original and that’s one of the reasons I try to make unique music.

Skye: during the video for “Bystander” you appear in your underwear and bra. You are very sexy, no doubt about that, but was it your choice to do it like this? I ask this as once I described an artist as very sexy person but got asked by the same person to delete that passage as music has to be upfronted rather than looks. How do you react to that as a women?

I think this question comes off misogynistic because you’re asking “If” I have control over what I wear. Would you ask a man if he had a choice in what he wore? I design and control every aspect of what I present to the world.

To learn more about how hands on I am with our music videos: https://www.youtube.com/results?search_query=behind+the+scenes+bystander

Well, it could be that the record company or a PR person is/was pushing you to do it, but your answer is clear. Now that I look back at the more recent clips and look back at the start of the band it has become clear that you somehow love to dress up as Harley Quinn? What’s the idea behind it?

Harley Quinn is an inspiring character. But to me there’s a character that I prefer, TANK GIRL. She’s my favourite. Many different characters inspire the videos including the villains and monsters. There’s no meaning behind it other than taking strength and inspiration and reworking it into my ideas.

Is having control over certain things important for you? I got this impression whilst listening to your tracks.

Well depends what you mean by certain things. Matt and I compromise with most aspects of the band, but in some situations with the art I have more control and with the music production he has more control. But we trust each other and will always listen to each other’s opinions.

How will the rest of the promotion for the new album run? I have no clue what’s possible in Canada, but here in Belgium there are no concerts allowed yet.

In Canada we are in a harsh lockdown until June. It is unfortunate that the Covid-19 situation is not doing so well here. There are no concerts yet. But we’re hopeful for the future.

I know you got a lot of interview request and it must be hard at some point. Did you had some funny questions so far? Or some bad times?

No bad times. All the interviews have gone pretty well. To be honest not many particularly funny questions either. I’ve been doing interviews for a very long time so nothing surprises me anymore.

Is there a question I should have asked, but didn’t for some reason? You can answer it too.

This album is an invitation to new fans to discover our world. We aren’t typically a band you can understand during one listen. You need to be willing to dive into the deep end. We are on a unique mission to bring the worlds of Metal, Pop, Punk and Rock together to help music evolve to the future.