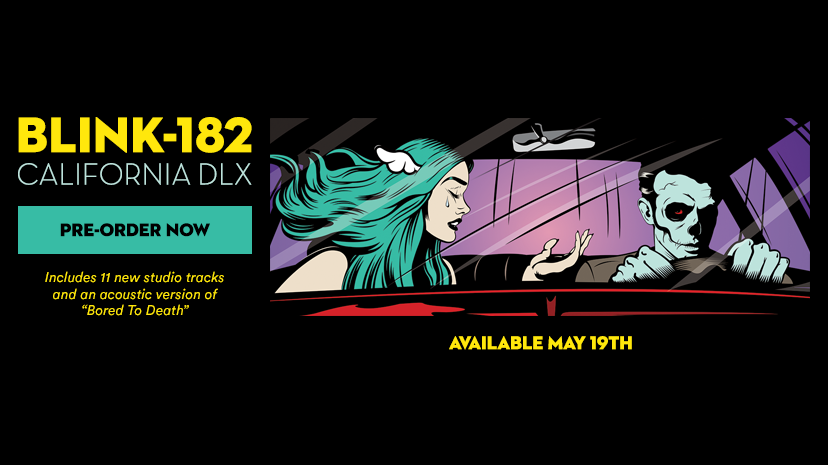 March 16th 2017:  After delivering one of the most anticipated albums of 2016, Grammy nominated pop-punk band, Blink-182, will be dropping their deluxe edition of California on Friday, May 19th. The deluxe album includes 11 new songs and an acoustic version of Bored to Death in addition to the original album. And I’m the lucky one who can review it, yup: done with a big smile!

Quote: "We just felt like making more music so we jumped back in the studio.  It started out as 3 or 4 songs but we ended up with 12 that we were all excited about." - Travis Barker.

The trio topped the UK Charts (their first ever UK #1) and Billboard 200 chart as California debuted at number one. Two songs from the album, Bored to Death and She’s Out of Her Mind both hit number one at Alternative Rock radio in the US. The band successfully headlined their sold out 2016 arena summer tour in the states and will continue touring throughout 2017 in both the US, UK and Europe.  Since their humble beginnings twenty-five years ago, when they started playing in a San Diego garage, Blink-182 have sold over fifty million albums worldwide and rocked audiences from Adelaide to Zurich having become one of the defining rock bands of their generation. Now with Matt Skiba (of Alkaline Trio) joining Blink-182 as singer/guitarist, the group starts a new chapter.

Another reason why we review this one is that they will come to Belgium very soon (they will actually play at Rock Werchter). It’s my first Blink-182 review ever and I’m glad I can finally add them to my list of reviewed bands! I have seen them in the past on stage quite a few times and always enjoyed them. Their Punk-rock music has a commercial and smooth touch, sure and I like it and that’s what counts! Next to the album are 11 new songs and one live track (unplugged), so it’s surely something nice!

Cynical is a short one (not even 2 minutes), but this nicely polished rocker heats it up in a perfect way. After that one of their big hits shows up: Bored To Death. The melody and the vocals blend in a perfect way together with the guitars and drums making it a catchy rocker. It will actually kill your boredom and make you wanna jump up and hit the dancefloor or give you a live on stage feeling. She's Out Of Her Mind is another nice and catchy one with cool backings that will stick on you and  make you sing-a-long. Los Angeles, well I have never been there, but maybe indeed this city might save me and change me in the way they sing about it (whilst giving it a very catchy and rocking sound). Sober is an honest track with the right vibe, whilst Built This Pool is a nice joke about building a pool and naked bodies. No Future is a more polished track and has nothing to do with The Sex Pistols (way too funny, catchy and polished).

Home Is Such A Lonely Place is a sad song and almost sounds like a ballad. Kings Of The Weekend is simply a party track and has the right title! Have fun and enjoy! Teenage Satellites is not only catchy & sexy it also appeals to their fans all over the world and describes them at best! Left Alone is a nice but sad one, but with the classic sticky sound. Rabbit Hole is a great rocker with straight lyrics and catchy backings. This song will make it on stage and might even become a sing-a-long moment! San Diego starts like a ballad, until the guitars change it into a stadium rocker with now and then a resting point. It’s also nice to hear they want to buy tickets for The Cure and go see them in San Diego or didn’t I hear it well? Another cool rocker is The Only Thing That Matters. Main title and second big hit from the album is California: I wish I could go there one day and see them on stage over there and relive their lyrics in this way as it’s really a nice and soft track sung with love about California.

Bohemian Rapsody is yet another short joke (30 seconds of fun) and has nothing to do with Queen. Parking Lot is another funny rocker with a catchy chorus. Misery is a rocker with a sad story, just like the title says (broken heart). A bit of melancholia comes with Good Old Days, whilst Don't Mean Anything fills the time with a nice melody and catchy hooks. Hey I'm Sorry sounds very nice and catchy. Last Train Home is something I didn’t do much, as in Belgium you are never sure if they are not cancelling the last train due to too much traffic or some other stupid excuse. The story is a bit romantic, with a sad pitch. Wildfire has nothing to do with Evig Natt as it’s a funny rocker with some punk feelings in it and a very catchy sound. 6-8 is one of the best tracks (next to the hits): it’s pure punk rock with a melancholic touch. Lost Long Feeling & Bottom Of The Ocean are also great and catchy tracks with a high quality. Can't Get You More Pregnant could have been worked out to a fulltime track, but got here in as a 35 seconds track, a pitty as I feel it could have become more. As last we get an unplugged and live version of Bored To Death clearly showing off this song had everything to make it and oh yes: listen to the crowd singing a-long and clapping with their hands!

Well: it was a nice and long trip! Hope you go see them on stage and enjoyed this one too!