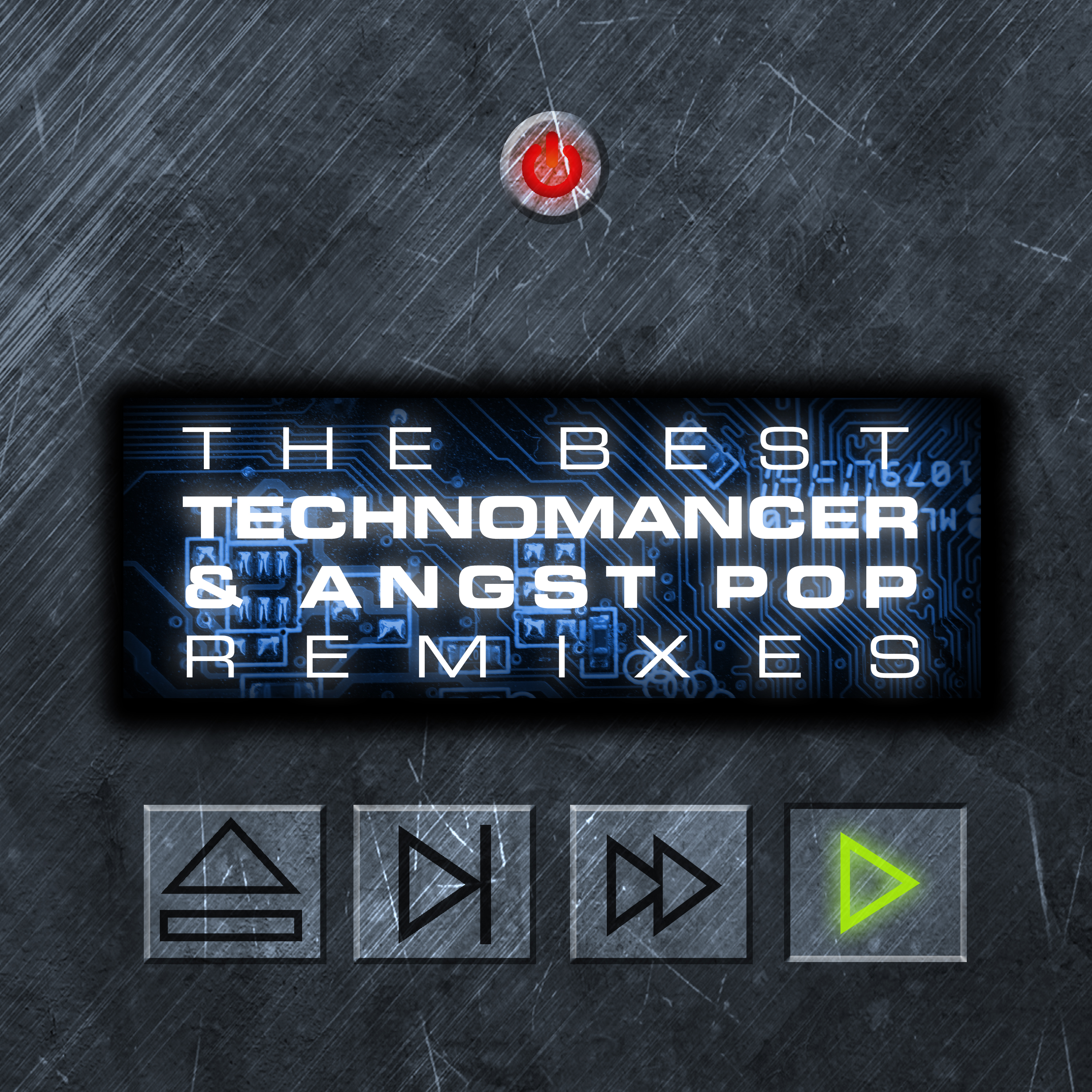 If you love the retro 80’s feel with a poppy & synth flair with typical electronic drums than you should absolutely listen to this collection of remixes! I must say that I knew some of them (but hey: I almost reviewed everything that this label released over the past few years) …

I’m a bit fighting with the idea on how to start, well the idea would be to try to review this collection as if I’m unknown to these tracks. It starts with a reset remix by our duo:  Robert MarlowSmile. You can hear the typical Technomancer sound (the drums and synths), If you don’t know this guy then I can tell you he played with the original members from Depeche Mode, spent some time together with Alison Moyet and this is for sure not a nobody. Actually you can hear clearly some influences by Depeche Mode in the music and backings. Another great track with catchy vibes is their rework of Rossetti’s CompasMy Beloved (Abi’s Electro Mix). The synths are just great, giving it that extra push that makes it perfect!

Another legendary band is Die Krupps, here with Robo Sapien. The violent electro attack feels nice, pretty catchy and almost a sing-a-long. Another big shot is Nitzer Ebb with Once You Say: a very catchy and groovy track. The combination of two stars is simply the best thing on this album Apoptygma Berzerk with their version of the Major Tom classic: be ready to dance and jump up and down! Throw your arms in the air! Dark and poetic is the best way to describe the electronic pearl from Anne Clark with The Darkest Hour.Johnny Normal talks about There’s a girl  that lives in the sea: poppy and up-tempo with a touch of Gary Numan. In the end it’s pretty catchy. Page Som Et Skall is a total synth pop surprise for me, totally unknown to me, but I like it and even feel like dancing! I don’t understand a thing, but the sound is great and that’s what counts (together with the smooth melancholic touch)!

Trakktor Spitting On Your Grave (1991 Remix by Angst Pop feat. Technomancer) is by far the most aggressive track, dancefloor orientated with a good tempo but a bit too much noise in the background. Technomancer feat. Angst PopElectronic Warfare (2015 Version) is a tune I almost know by heart, just a pity that the vocals and backings here are not always blending in with each other (this suddenly came up after listening a bit too much to it). Angst Pop comes up with another classic track Ødipus Rex 2012 (Spiritual Warfare Remix), this time in a more techno minded version with a floating sound. Eminent SolDecade (Technomancer feat. Angst Pop Remix) sounds like the perfect looking back at the history of music track with a fine melancholic feel and the perfect retro vibe. The song even sounds a bit catchy and makes you start waving with your arms, so might even be a perfect closing track for a gig! Another nice track comes with Rossetti’s Compass Blood On The Carpet (Knife In The Back Remix by Angst Pop feat. Technomancer): it has the right tempo and the right beats, just stays stuck in my head! ShatooFloodlights (Dance Version by Angst Pop feat. Technomancer) runs a bit faster than the original, but still goes on with the right vibe. It’s a great retro touch with a happy Eurovision feel (and perfect vocals).

SpilstarDignity (Technomancer Remix) is a bomb of a synth pop track: start jumping up and down, start dancing and feel happy! The beats and vocals are great. I must say I didn’t knew this band. ShatooOne Night Love (2013 Remix by Angst Pop feat. Technomancer) is the last track from this band and will us give us their typical back to the 80’s poppy feel with a melancholic touch. Remixing AttritionNarcissist (ID Mix by Angst Pop feat. Technomancer) must have been a true pleasure, as you clearly hear the synergy between the original and the remix. If I’m honest I can say that the remix really makes it stronger and better. Supercraft I Am (Technomancer feat. Angst Pop Remix) is again a band or a project that I don’t know at all, but the result is finger licking sweet and ready for the dancefloor! Carlos PerónDer Komtur (Technomancer feat. Angst Pop Remix is the last track on this epic remix album. The intro is a bit long, but once the beats arise and hook up the tempo it all gets into the right direction.

It was a lot of work, but this one was for sure worth it as I could discover some new bands, mixed some of my all-time heroes. It’s clear that this one needs some time to grow and will introduce some “new” bands for some and that is always nice, for sure if they surprise you in a positive way! Keep up the great work, folks!