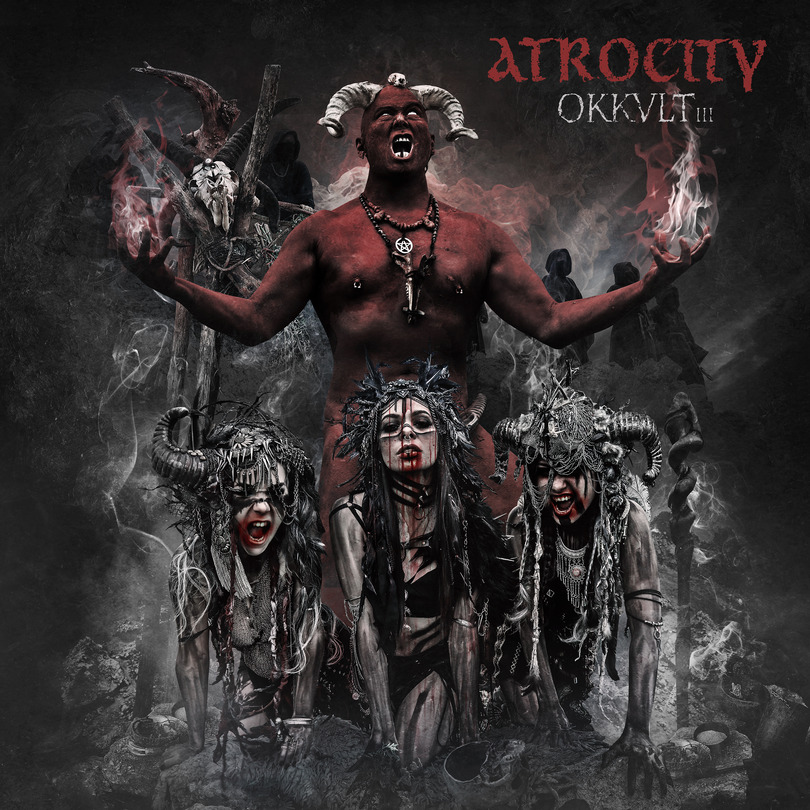 ATROCITY are back with full force! "OKKULT III" marks the furious finale of the "OKKULT" album trilogy, and it is packed with brutal death metal galore! The chart-breaker "OKKULT II" already delighted the ATROCITY fan community and the metal press alike with thrilling death metal songs that get under your skin. With "OKKULT III", ATROCITY will finally drive their fan base to the point of ecstasy!

Descecration of God starts with a scary feel: some whispering and the sound of zombies, soon joined by a symphonic metal touch and some words in Latin. Once the guitars start to shred the real song has started. Alex Krull has found his most powerful approach ever!

Fire Ignites sounds like the title of this track: fired up, hard hitting, sharp and with almost no time to catch some breath. The grunting and shouting really sounds like monstruous and raw!

Born To Kill has a more roaring guitar sound, but mostly sounds like the previous song. It’s clear what is the thin red line in this album!

Bleeding For Blasphemy starts slowly but once the song starts to blossom it becomes raw and brutal! You can feel every word is poisoned and filled with raw power whilst the guitars and drums are fighting to get the title of most aggressive instrument!

Priest Of Plague starts with the drummer bombing us and sharp guitars! From then on the vocals spitfire on us and takes over the song! Sharp, fast & loud!

Malicious Sukkubus (Feat. Elina Siirala & Zoë Marie Federoff) starts with a spooky touch, some demons, a church bell and a symphonic metal touch. It’s clearly the song with the most variation and according to met simply the best song on this album! I really adore the extra vocals and the wider global sound!

Lycanthropia is a death metal power bomb! Feel the hard hitting drums, the heavy bass line and the sharp lead guitar chords whilst the vocals are like spitting fire!

Faces From Beyond sounds brutal, empowered and real! It’s as if you are in the studio with them! What a blast and what an energetic song!

Cypka has a spoken word part in Russian but could also be Croatian. For the rest I can tell the drums are bombing your ears in such a way that you really feel the bass of the drums! It’s good the song slows down from time to time.

Teufelsmarsch (Feat. Robse Dahn & Misstiq) is the last song on this album and also has some extra vocals. This time the vocals sound like sharper and heavier: rendering the sharp and speeded up sound! This is clearly speed metal mixed with death metal!

It’s a very energetic, raw and brutal album: filled with powered up bombs and with a revitalized Alex Krull behind the desk! This album feels like the best Atrocity album ever!