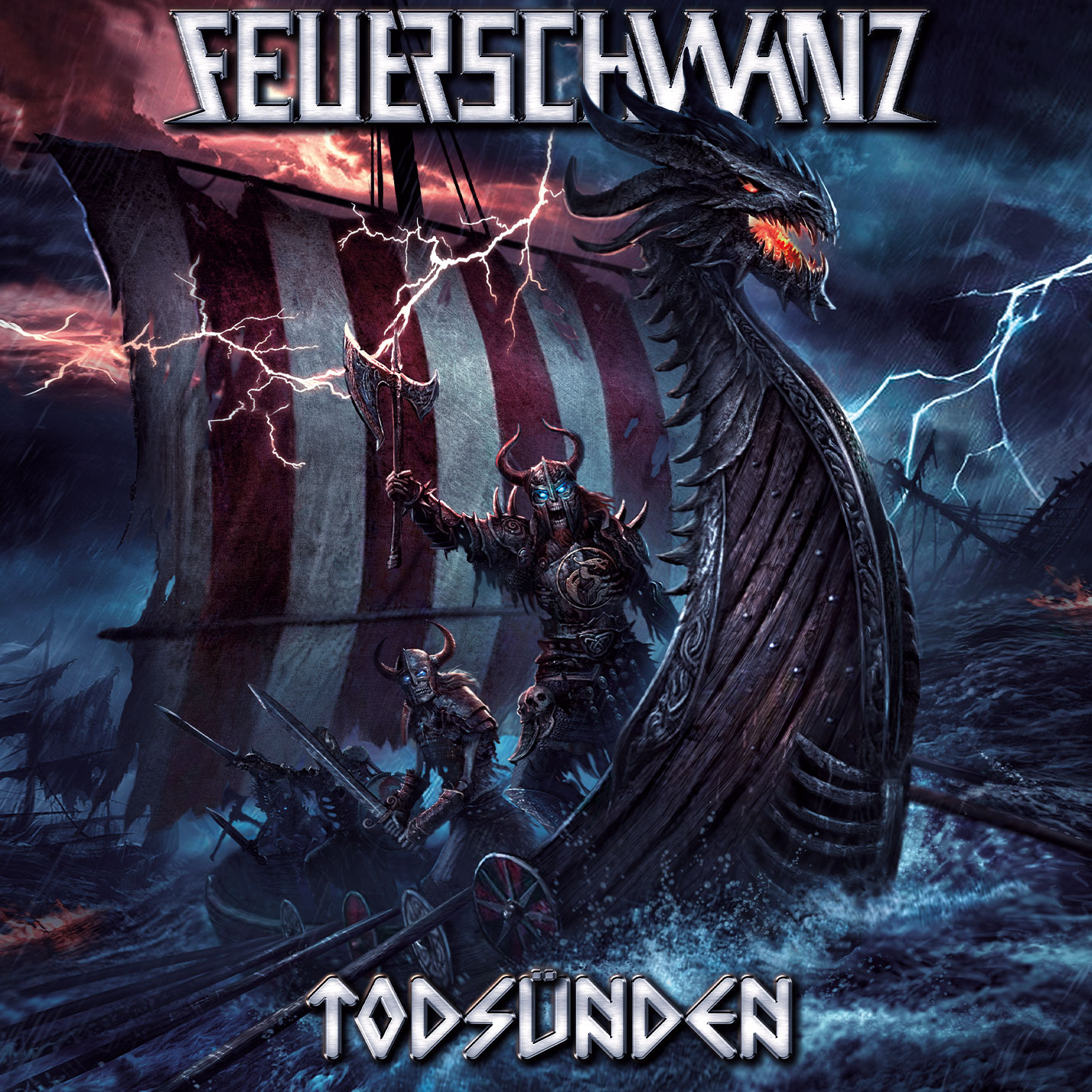 Storming the German charts with their previous #1 album, Memento Mori, the hottest German folk rock band FEUERSCHWANZ return – inviting fans on the most exciting journey through time. Presenting the greatest (and worst) earworms in the history of music, the spectacular covers album, Todsünden, will be released December 30, 2022 – exactly one year after the release of Memento Mori – via Napalm Records. The album includes two completely new songs, as well as the cover bonus tracks from their last two studio albums.

The album’s newest single, the band’s adaptation of ABBA’s “Gimme! Gimme! Gimme! (A Man After Midnight)”, takes you straight back to the arcades of 40 years ago! This track’s existence in itself is a result of a bet made within the band. They agreed that if their latest studio album, Memento Mori, entered the German charts above the Swedish legends, they would cover this song. Lo and behold, the results were overwhelmingly positive, yielding this new ABBA cover!

Premiering alongside an official music video, the characteristic elements of FEUERSCHWANZ meld together with the legacy of Swedish pop heroes ABBA!

Feuerschwanz states:
“‘The world definitely needs another ABBA cover!’ That must have gone through Hodi's head when he made a highly dubious bet on New Year's Eve 2021/22. If Memento Mori beats Voyage by ABBA in the German album charts, we will create a cover version! Hodi, as a self-confessed non-fan of the Swedish band, then had to admit two things to himself: Firstly, Memento Mori reached number 1, so he has to make the bet true. Secondly, the ABBA songs are not bad at all - quite the opposite! So listen to the folk metal version of ‘Gimme! Gimme! Gimme!’ - I wonder if there was mead involved? Certainly. Does the world really NEED ANOTHER ABBA cover? Probably not. Mea culpa. Mea maxima culpa.“

Genre exploration and loads of fun aside, amidst it all, FEUERSCHWANZ clearly showcase their musical skills and development on Todsünden, convincing with ultra-elaborate sound. In particular, vocalists Hauptmann and Hodi flex their deft skillset, from skyscraper 80s-style falsettos to deep growling and even rapping (as evident on their cover of Deichkind’s “Limit”). So jump on board this thrilling musical ride and witness FEUERSCHWANZ conquering a kaleidoscope of musical styles with ease!

Proving their versatility with every single song on this album, FEUERSCHWANZ overcome linguistic, musical and genre-specific limitations and unite the tavern in a sonic feast. Effortlessly combining different genres, the medieval folk rock geniuses reinterpret everything from pop to punk rock to metal hits without ever losing their own characteristic sound. From beloved evergreens like “Gimme! Gimme! Gimme!” to chart toppers like their latest release “Blinding Lights”, everyone will find their favorite. With humble support from musicians like Melissa Bonny (Ad Infinitum), Saltatio Mortis, and Angus McSix, Todsünden is a musical spectacle beyond compare.

This exciting ride starts off with a cover of Swedish pop legends ABBA. FEUERSCHWANZ give their world-famous song “Gimme! Gimme! Gimme!” a folk rock vibe with a gloomy but still uplifting atmosphere bursting into heavy riffing and drumming. Another pop-tinged rock song of legend is covered with Europe‘s “The Final Countdown”, but the album also features current highlights like “Blinding Lights“, Ed Sheeran’s “I See Fire” and “Ding” by Seed featuring Ad Infinitum’s Melissa Bonny. Punk rock tracks like “The Bad Touch” by the glorious Bloodhound Gang or tracks by German bands like “Hier kommt Alex” by Die Toten Hosen or “Der Graf” by Die Ärzte – a track that FEUERSCHWANZ honor with their very own trademark by telling ancient tales in their own fabulous way. Similar treatment is given to “Engel” by German legends Rammstein, as FEUERSCHWANZ pick up the story and dress it in their own folkloristic gloomy sound, while in its new version, former European summer hit “Dragoesta Din Tei” throws the listener directly into a wild Viking party, releasing medieval power that will have them out of their seat in no time. In honor of the metal scene, FEUERSCHWANZ present their very own version of Amon Amarth’s “Twilight of the Thunder God” but give it a new spin by turning it into a medieval hymn with 80s rock vibes. Other famous tracks include covers of Ghost’s “Square Hammer”, a turn at Powerwolf‘s “Amen and Attack” pumped with chanting violins, Sabaton’s “Gott Mit Uns”, and the all-time classic “Warriors of the World” by the one and only Manowar, which they present together with honorable guests Angus McSix, Saltatio Mortis and Melissa Bonny.