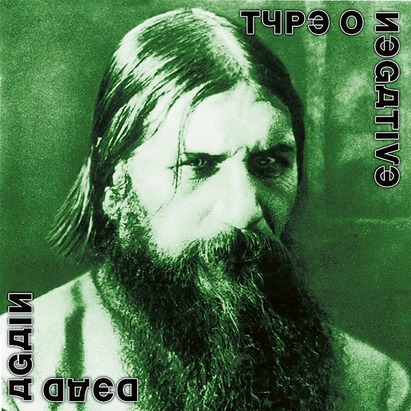 Saw this band in the AB, ages ago. I saw Peter from really close and was impressed. I really adored the gig and his Prescence on stage: he really blew me out of my socks!

This was the seventh and final studio album by the American gothic metal band Type O Negative, released before the death of frontman Peter Steele in 2010, and subsequent dissolution of the band. It was released on March 13, 2007, through record label Steamhammer, a subsidiary of SPV. Since it was released under a different label, Dead Again is the only studio album to not be included in many of the band's compilation releases including 2013's The Complete Roadrunner Collection 1991 - 2003 and 2019's None More Negative boxset. And with Steamhammer's parent company SPV GmbH declaring bankrupt in 2009, many of the artists that had signed to the label were not able to rerelease their albums due to legal issues, including Dead Again. Thankfully, on August 20, 2021, the album was made available once again on Spotify and Apple Music through Nuclear Blast.

On March 13, 2022 (the 15th anniversary of the album's release), it was announced through social media that Dead Again would receive a reissue on vinyl, CD, and cassette.

Dead Again is the opening track and sounds like as if he never died. I hear the guitars, his vocals who sound like as if on fire with yet his typical voice! The lyrics are crazy as it’s as if he predicted his own death.

Tripping A Blind Man has deformed vocals mixed with clean and clear vocals resonating from all corners of the room. The typical gothic rock sound keeps up the words on the sheet of paper. The more rocking part halfway keeps it interesting as it’s a pretty long track.

The Profit Of Doom takes out 10:47 and mixes a typical doom metal sound with a spoken word and also talks about his death even before he died. I think this and many other songs has inspired a lot of doom metal bands as I can’t believe this is actually an old song. As it’s a pretty long song it has also some softer moments, next to the hard screaming parts and typical roaring guitar sound. When he screams my soul is on fire you really feel the misery and the pain. The more I listen to this song the more it feels like this was his way of telling he needed help and wanted to leave this world.

September Sun takes out 9:47 and starts slowly with a piano. Kenny Hicke’s voice can be heard really clearly here (better then on the previous track). This song almost sounds like a duet. This song is actually about a broken heart and not about the weather. The cheering crowd gives it a psychedelic touch, just as the organ.

Halloween In Heaven calls up a lot of dead artists and we know he belongs in this list too, making it a double flipped song. It’s a bit creepy, but that’s also Halloween. This all sums up perfectly for what this band stands: fun, depressing, revolting, special, psychedelic … The vocals are really top here as Peter’s changes his voice every 30 seconds and he gets some help from Tara VanFlower and Kenny Hicke.

These Three Things takes out a humble 14:21. I adore the guitar play and the vocals, just like the many shifts in the tempo and the use of the instruments who jump in and out as if coming from different directions. It’s a very rich and consistent song! I would describe it as one of the best ones from this album! If you don’t pay attention you could say you are listening to 3 songs instead of one and that was also a typical thing for this band!

She Burned Me Down sounds interesting from the start, has cool vocals and I can say Peter does almost everything he wants with his voice: from really deep bass, screams, catchy and high notes. The guitars and the drums really sound cool and perfectly mixed! As always it feels like listening to different songs played one after the other!

Some Stupid Tomorrow is one of the hardest songs on the album and mixes all kind of vocals. At one point you thing it’s a Russian guy singing and the other time it’s clearly English. The tempo also changes from one minute towards the next minute. It’s a brutal but beautiful song and also a very melodic one! The guitar play and the drums are really excitingly powerful!

An Ode to Locksmiths springs almost out of the previous song. The song has really nice moments and sounds like in the better days of the band. The sharp screaming towards the end gives it a real heavy metal feel with a retro 80’s touch!

Hail And Farewell To Britain could have been written in 2022, but is indeed an old song and closes the regular album. The lyrics are pretty hard and once again shows how Peter Steele was feeling back then. The synth plays an important role once halfway, but the rest of the band also works well. Towards the end it becomes a chaotic farewell song.

Up comes the live extra’s taken from the Symphony for the Devil live DVD:

Everything Dies (live) is a classic track from this song. I must be honest: the quality is not top, but gives you the live impression. I like the softer parts as you can actually really listen to a clean sound (somehow it all gets screwed up once all the instruments jump in). Yet you can feel the energy and the despair.

Another classic comes with My Girlfriend's Girlfriend (live) and brings in the right mood for this band. This song is one of the many reasons why this band is so great!

More fun comes with Are You Afraid - Gravitational Constant (live) where you get the feeling the crowd is clapping hands in the beginning (might be the drum peddle). Here you can hear the more gothic minded side of this band. Feel the live energy!

Black Sabbath (intro) Christian Woman (live) gets backings from the crowd and shows how popular this band was back than!

We go on with this live kinda best of with Love You To Death (live) it sounds like as if it was an encore. The crowd really seems to enjoyed it very much and it’s always great to get that feeling when a band plays one of their best songs.

Black No. 1 (Little Miss Scare All) (live) shows during 9:11 why the audience loves this one so much (listen to the people singing along).

Last but not least are the songs taken from Wacken Open Air 2007:

Anesthesia is - to me - a lesser known song, but seems like the crowd cheered for it. The sound here sound better as the with the previous live tracks.

Christian Woman is another hit and really feels like great here! It’s also nice to hear the fans adore this live version and show it!

Another hit is the next one: Love You To Death and is again a favourite track of the fans (clearly).

Kill You Tonight gives a funny ending and a blast!

It was great to review this old one and hear the guys live on 2 different stages! Listening to the album now and listening to it back before Peter Steele died gives it a different touch. Some songs now feel like predicting his death, but that might be me. I’m glad I got this one in my mailbox and can now add it to my (finally completed list of all their albums). Just sad this icon is dead, but giving this album a review anno 2022 puts a new spotlight on an artist that has influenced so many people! Just don’t loose yourself in a bottle!