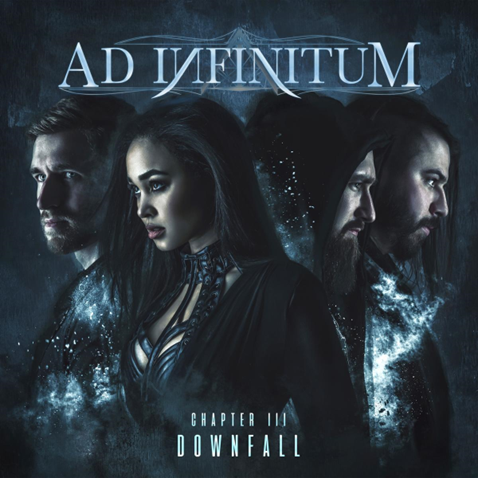 Since the release of their debut album in 2020, rising modern symphonic metal stars AD INFINITUM have stirred up the scene, and are now about to unveil their electrifying third studio album, Chapter III – Downfall, out March 31 via Napalm Records. Consisting of catchy anthems and heavy, modern riffs paired with the vicious vocal melodies of the incredibly talented Melissa Bonny, AD INFINITUM's unique sound has garnered them millions of video views to date on hits like “Marching on Versailles” and “Unstoppable”. This next mesmerizing offering provides another wave of proof of their breakout success.

With their powerful first single, “Upside Down“, the multinational band garnered over 250k views on YouTube within just a few days. Now, after returning from several sold out shows on their expanded European and UK tour with Amaranthe, Beyond The Black and Butcher Babies, they have unleashed their next appetizer, “Somewhere Better”.

“After playing “Somewhere Better” on tour and sharing fantastic and emotional moments with thousands of people all around Europe and the UK, we are thrilled to release this song, together with a video full of memories of our tour with Amaranthe, Beyond the Black and Butcher Babies. Warm greetings to all the people who will spot themselves in this video!”

Produced by AD INFINITUM and Jacob Hansen at Hansen Studios, Chapter III – Downfall showcases that this up-and-coming quartet can effortlessly turn the genre upside down, gracing it with contemporary vibes without forgoing their signature metal origins, and thrilling all metal fans as they rise to the top!

“The word is out, Chapter III - Downfall is on its way! For this album, we explored stories and legends of Ancient Egypt with, as star character and main inspiration, Cleopatra. We added some extra dimension and sounds to our signature AD INFINITUM sound to create an extra dimension, transporting the listener to mystical landscapes of another era. We are beyond excited to start to unveil this new record!“

Opening track “Eternal Rains” immediately catches your breath with a captivating chorus, followed by electric “Upside Down”. “Seth” convinces with a resounding modern sound and eerie ambience that’ll have new fans turning heads, whereas “From The Ashes” impresses with reminiscence of artists like Meshuggah, proving that AD INFINITUM never fails to deliver surprises. “Under The Burning Skies” directs its haunting vocals towards the horizon, unfolding into an intense mid-tempo ballad shortly after. As a special treat, AD INFINITUM welcomes Chrigel Glanzmann of Eluveitie, who provides his voice for the atmospheric monologue introduction on “Legends”, paving the way for a touch of Middle Eastern-inspired djent flavor.