Following their latest studio album Final Days (2021, AFM Records), that hit a phenomenal #3 in the German Album Charts, power metal masters ORDEN OGAN have released a brand new single version of "Absolution For Our Final Days", featuring LEAVES' EYES vocalist Elina Siirala! Just recently, the band shared a re-recorded version of "It Is Over", that features Dennis Diehl of ANY GIVEN DAY (Listen HERE)!

"ORDEN OGAN and Leaves' Eyes are connected by a long live and personal history on many levels. Elina is a phenomenal singer and a great person, easy to get along with, easy to work with. It was the obvious choice to ask her if she was interested in doing this little experiment. We are happy to have her on board. It’s crazy how different a song sounds with different (style of) vocals, right?!“

The original song version with Seeb is featured on ORDEN OGAN’s much acclaimed, latest magnum opus, Final Days, that has been released in March 2021 via AFM Records. The album, once again produced by the extraordinary vocalist himself, turned into a real smasher and proves: the Germans are among the best songwriters in heavy metal! Final Days combines finesse with huge riffs, clever arrangements with great melodies and even after the umpteenth spin you still discover something new.

ORDEN OGAN have announced a series of summer dates, including appearances at Wacken Open Air, Summer Breeze, Masters Of Rock or their own Pirate Cruise II, make sure to catch the band live at the following dates: 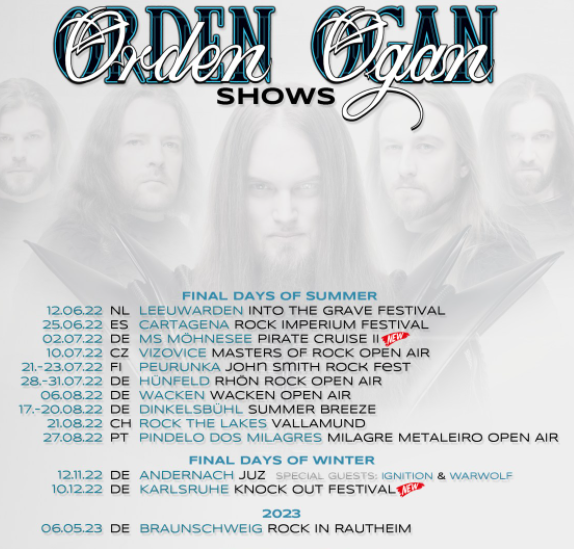